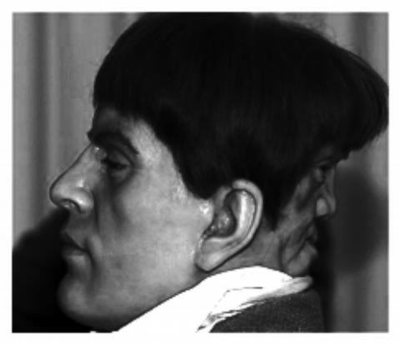 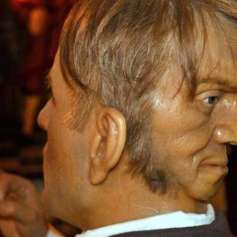 A familiar sight on social media

You think you’re having a bad day? Well, imagine how bad you’d be feeling if you had a second face on the back of your skull, whispering ‘things one would only speak about in hell’ as you slept. What if the face delights in your suffering and ultimately results in your suicide?

It would be doubly bad if you were also fictitious.

But let’s not allow such trifles as ‘truth’ to hamper our enjoyment of emotionally abusive apocryphal parasitic heads.

Edward Mordake (sometimes cited as ‘Mordrake’) first appeared in ‘official’ publication in 1896, in Gould & Pyle’s ‘Anomalies and Curiosities of Medicine’. He was purportedly a 19th century gentleman who was ‘heir to one of the noblest peerages in England’, and an accomplished musician and scholar. He was born with a case of polycephaly, or craniopagus parasiticus (depending on your reading of the legend), which resulted in the growth or a parasitic face behind his own. His ‘main face’ was said to be so chiselled and beautiful that it was referred to as being an Antinous – “arguably the most notorious pretty boy from the annals of classical history”. However, his parasitic face was that of a beautiful woman, “lovely as a dream, hideous as a devil” that possessed a form of independent sentience and intelligence.

The initial report recounts – “The female face was a mere mask, “occupying only a small portion of the posterior part of the skull, yet exhibiting every sign of intelligence, of a malignant sort, however”. It would be seen to smile and sneer while Mordake was weeping. The eyes would follow the movements of the spectator, and the lips “would gibber without ceasing”. No voice was audible, but Mordake avers that he was kept from his rest at night by the hateful whispers of his “devil twin”, as he called it, “which never sleeps, but talks to me forever of such things as they only speak of in Hell.”

Mordake is said to have attributed the parasitic face to a curse or punishment as a result of the wrongdoings of his ancestors. It was reported that he begged his physicians to dispense with the face, even if it resulted in his death. Yet his pleadings were to no avail, and, driven mad by his attached ‘fiend’, committed suicide by poisoning at the age of 23. Yet, before doing so, he made sure to leave instructions as to the treatment and burial of his body, requesting the destruction of the ‘demon face’ and to be ‘interred in a waste place, without stone or legend to mark his grave.’

Like most perpetuating urban legends, there are no sources cited in the original text. Gould and Pyle cited only that the story of Mordake had been taken from ‘lay sources’, or, word of mouth. While this original printed source is from a medical background, its authenticity can be hugely brought into question when considering the other accounts within the work, many of which are similarly unreferenced and untraceable.

While the story of Mordake appears to be little more than hearsay, many academics (and the hard-working people behind ‘The Museum of Hoaxes’) have followed the crumb-trail to a further, earlier source – that of The Boston Post in 1895. ‘The Wonders of Modern Science: some half human monsters once thought to be of the Devil’s brood,’

The article, as penned by poet and fiction writer Charles Lotin Hildreth is a collection of descriptions of ‘human freaks’ as catalogued by the (non-existent) ‘Royal Scientific Society’. ‘stand-out’ characters include ‘The Fish Woman of Lincoln’, the ‘Four-eyed man of Cricklade’ and ‘Half Human Half Crab’. However, the illustrations included to assist the reader’s imagination are worth viewing for their bizarre artistic merits alone. Last in Hildreth’s list, just after the ‘Norfolk Spider’, is that of ‘Mordake and his “Devil Twin”’, later being lifted word-for-word for Gould & Pyle’s publication. Mordake is not exactly in credible company.

While printed as a standard newspaper report, the presentation of fiction as non-fiction was commonplace in 19th century news culture. While amusing to a contemporary audience, such creative efforts led to multiple urban legends and hoaxes being accepted as fact into contemporaneous and contemporary culture. It must be considered that Hildreth was a prolific author of science fiction and lurid gothic poetry; images presented in his ‘Wonders of Modern Science’ article would not sit out of place within his other literary creations.

Sadly (or thankfully, however you look at it), Mordake was categorically a creation of Charles Lotin Hildreth, and arguably his most successful creation. Nonetheless, images of Mordake perpetually circulate on social media, usually attacked to a black and white photograph of a two-headed man (see pictures). However, the image is that of a wax effigy created some time after Mordake came to the public fore, and is simply an imagined likeness.

Still today presented as a human ‘oddity’ or meme, images of Mordake’s wax likeness circulate as fact and are still featured in novelty publications and wax museums to this day.

Vout, Caroline. Power and Eroticism in Imperial Rome. Via Wiki.