Southampton old Cemetery is an unsurprisingly beautiful landscape. Being one of England’s oldest municipal cemeteries, it fulfils many uses, from historical site to nature reserve and a space for public engagement. And, judging by the enormous amount of poo I had to dodge, it is also a very popular route for dog walkers! 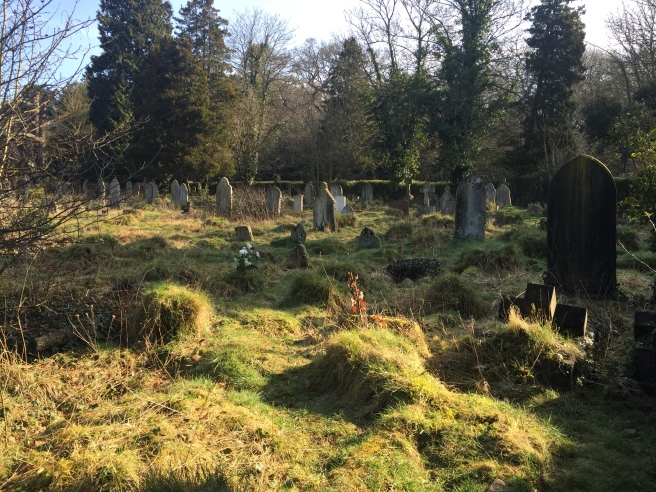 Cemeteries are wonderful places to walk and relax, but they are also places to reflect and mourn. Stepping in piles of Labrador faeces isn’t high on visitor’s lists. Nonetheless, the cemetery is a beautiful place, with many older areas left to grow freely and are filled with wildflowers and wildlife. Southampton offers the ideal mix of memorial site and nature reserve and is a site fully integrated into the local community. Despite this, the cemetery is not a working site in the traditional sense; around 6 to 8 interments occur every year, but only to existing family plots. 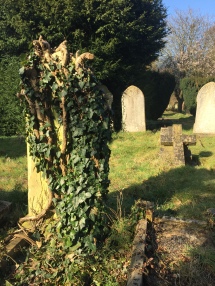 Southampton has been an important port since the stone age (recorded as being an important settlement called ‘Clausentum’ by AD 70) and has a rich and fraught maritime history. The hovercraft and spitfire were developed at the port and in 1620 the Pilgrim Fathers departed on the Mayflower, on route to the New World. In more famous and tragic histories, the Titanic sailed from Southampton. Most of its crew were Southampton locals, and, following the tragedy, it was recorded that,

Subsequently, the cemetery is filled with memorials to sailors, crew and those within the local shipbuilding trade.

The Old Cemetery has not always been called as such. In previous incarnations, it was The Cemetery by the Common and Hill Lane Cemetery but to name a few.

The cemetery was founded in 1843 where an Act of Parliament transferred 27 acres of land from Southampton Common to the Cemetery Corporation. By 1846, the cemetery was landscaped and by 1863, all parts of the cemetery were open and fit for burial.

Famous burials aside, the city has a rather interesting history in terms of designing the cemetery.

Initially, the council approached famous architect and landscaper, John Claudius Loudon. Loudon was renowned for his work in new city garden cemeteries and was conveniently, if temporarily, residing in Southampton at the time of the cemetery’s formation (all thanks to the illness he developed on the Isle of White as his wife was finishing her literary project.)

This post seemed rather fortuitous for the council who had no previous experience of landscaping a cemetery, not, at least, to modern aesthetic standards. After receiving a fee of £37, Loudon created a beautiful layout for the new burial ground. And, in true council fashion, it was promptly scrapped. This was partially due to objections from the Bishop of Winchester, who refused to allow an Anglican chapel to be set beside a non-conformist one. Nonetheless, Loudon’s plan was discarded, and the council set about creating the most delightfully obscure and Victorian of solutions: a public competition.

This was not a new concept as far as cemetery designs went; several counties had created landscaped cemeteries, parks and whole building complexes through competition entries from amateur architects. Competitions and death were rather interlinked in the 19thcentury and many were keen to have their name go down in the history books as the successful applicant.

The competition was eventually won by William Rogers, a local councillor and nurseryman (one who owns or works at a plant nursery, rather than the human kind.)

After Roger’s plan was implemented, with chapels far apart to please the bishop, the cemetery was finally opened on the 7thMay 1846. The Bishop of Winchester was present for proceedings and consecrated the new site with aplomb. As is still commonplace in many cemeteries, a portion of the cemetery was left un-consecrated, so non-conformists (those whose Christian beliefs aren’t that of the Church of England and agnostics etc) could be buried on site. Later, in 1856, Roman Catholics were also given use of the cemetery and more recently, a Jewish section has been implemented.

While there are few recent interments, the cemetery is maintained by groundskeepers and has occasional ecological input from professionals. Considering much of the cemetery is protected as a space for flora and fauna, the Southampton Council wildlife team keep tabs on the condition and suitability of the environment for wildlife.

Similarly, the Friends of Southampton Cemetery contribute enormously to the upkeep of the cemetery and cannot be commended enough. Whether they are assisting in the upkeep of graves, assisting families in finding relatives or operating guided tours, their voluntary work is invaluable in the preservation of the site. The same can be said for many cemeteries’ country-wide, where council budget cuts and sites sitting in disrepair are cared for and regenerated thanks to local people giving their time for free.

Sadly, as is the case with so many outdoor public sites, the cemetery is not free from vandalism; one of its most famous and poignant memorials suffered at the hands of such idiots in 2011. 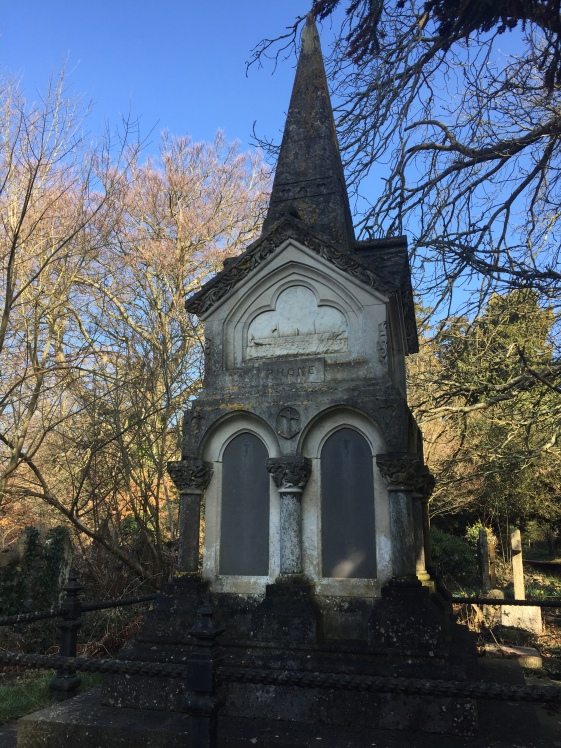 The 1867 memorial in question was to commemorate the 120 crewman who died on the ships the RMS Rhone and RMS Wye as their ships sank in the Caribbean following a hurricane. The substantial monument was constructed thanks to public contributions and was well preserved until 2011. Most of the families affected and lives lost were based in Southampton, hence the enormity of the monument – overall there was ‘a combined loss of 166 passengers and crew and 50 survivors.’[1] 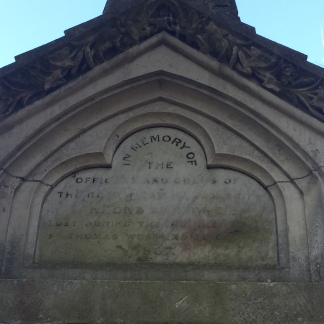 The vandals who, to my knowledge, have never been caught, smashed up a nearby grave to use as a weapon to scratch away names of deceased crewmen. ‘Foreign’ words were scratched across the plaques and masonry was destroyed. Once again, the Friends of Southampton Cemetery were left to pick up the pieces.

The BBC local reporter commented that ‘The vandals smashed the monument on 29 October – the exact 145th anniversary of the tragedy.’ Similarly, many other local graves were smashed, all for nought. As with many other cemeteries, this is not an unfamiliar plague. However, the cemetery, for all its sufferings, has several other notable interments – whose monuments are, at the time of writing, thankfully intact.

Representative of the great swathes of nautical tragedies commemorated within the cemetery, the grave of Stephen Wilson sits among many others, notable only in the engraving of how he died. Wilson ‘met his death by the falling of a mast at Woolston shipyard.’ 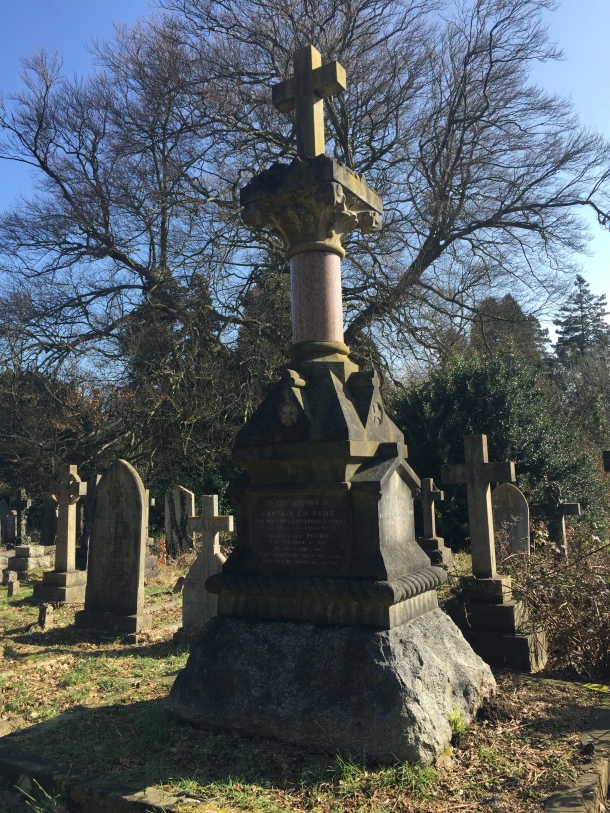 Another large memorial is that to the Royal Mail steam Packet ‘Douro.’ It’s a striking monument of pink granite and a high-sitting cross, commemorating those who died in the collision of the ‘Duoro’ with Spanish ship ‘Yrurac Bat.’ The death count was far less than the Rhone and Wye, with the loss of 21 passengers and crew. Somewhat relievedly, there were 114 survivors.

Captain E C Kemp is one such life lost who is commemorated within the cemetery and is still legible after years of rough coastal weather. The monument records ‘the officers, engineers and crew of the royal mail steam packet company’s ship Douro. Who perished at sea 1stApril 1882.’ 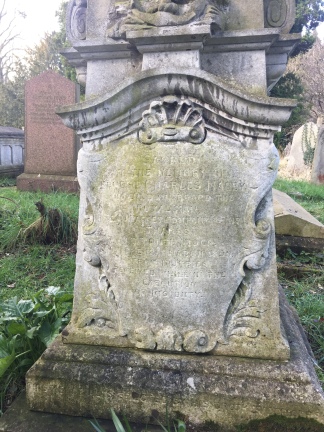 Another death upon a Royal Mail Steam Packet ship was Earnest Charles Nacey, who met his fate on board such a ship in March 1895. He is recorded as dying ‘from injuries received in the execution of his duty.’ 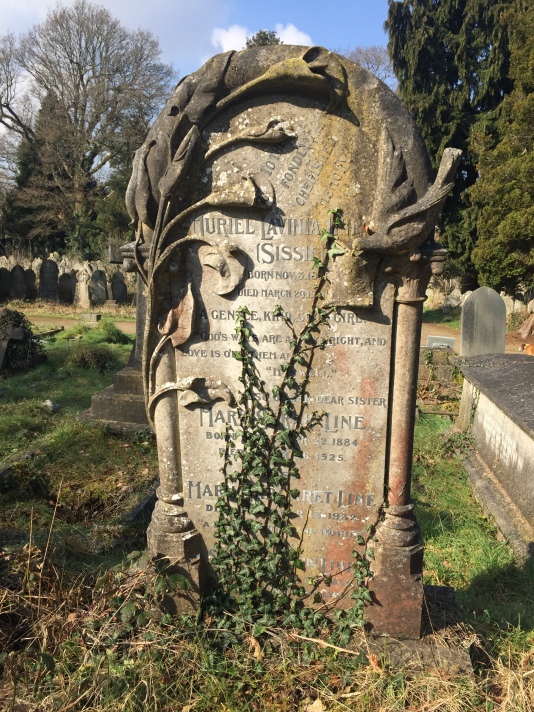 Muriel Lavinia, known as ‘Sissie,’ is a beautiful and unusual 1920s headstone, commemorating the death of a young, and clearly beloved girl. While not related to Southampton’s maritime preoccupations, it is a beautiful memorial whose sentiment holds fast to this day. 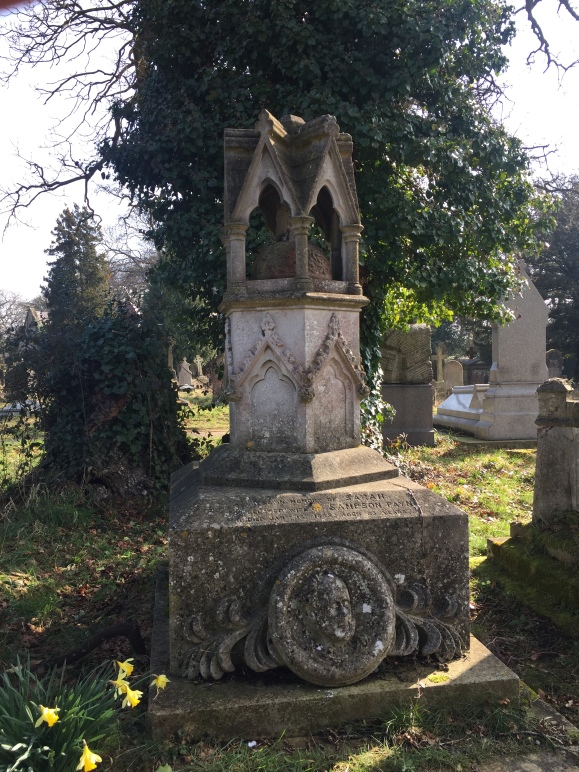 John Payne’s memorial has been the unfortunate sufferer of weather and lichen-related wear, leaving much of the original text, unreadable. It is however, a stunning memorial.

There are many wartime graves within the cemetery. Aside from traditional National War Graves, there are several familial memorials that remain poignant in their wording. Raymond Ashby has one such grave; the 23-year-old was killed at the battle of the Somme in 1916 and was recorded for eternity – by his grieving family – as ‘believed killed in France, near Flers, on the Somme, October 7th, 1916, but only reported “missing.” 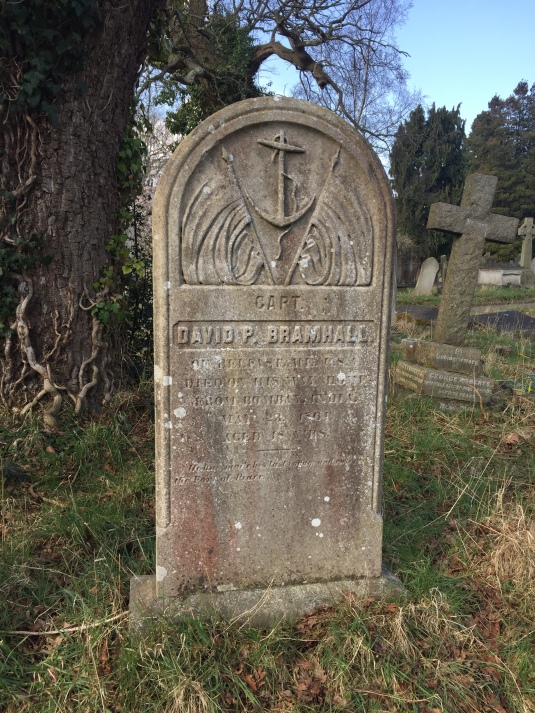 Another nautical grave of interest is that to Capt. David P Bramhall of Belfast, Maine. He is recorded as having ‘died on his way home from Bombay, India.’ His grave is a simplistic stone yet is carved with clear two flags and a crisp anchor.

Unusually, in the middle of Southampton Cemetery, lay several graves of the family of ex-Argentinian Dictator, General Rosa.

Firstly, there is the grave of Manuel Maximo Terrero, eldest son of Don Maximo Terrero and grandson of General Rosa. His epitaph is as much about his grandfather, as it is about the deceased, offering no other information about the interred man.

Manuel’s grave can be interpreted as being politically charged, having a large granite book atop the plot, with his headstone predominantly decorated with a likeness of justice, blindfolded with her sword and scales. 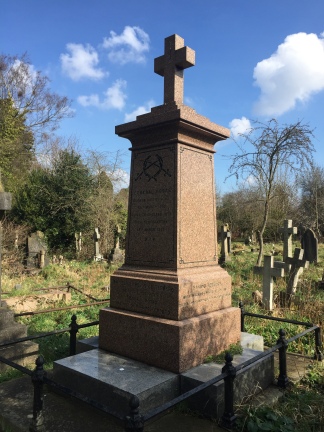 Nearby is the former grave of General Rosas himself. The grave has an interesting history, currently being empty, leaving a pink, granite obelisk sat atop empty earth.

Juan Manuel de Rosas was in power during the Argentine Civil Wars of 1814-1880 but was deposed during the Battle of Caseros, whereby his troops were defeated, and he fled to England. He spent the rest of his life in Southampton, dying on 14thMarch 1877. However, Rosas’ death was anything but simple.

Knowing that death was near and anticipating the unrest that would unfold, Rosas wrote in his will that,

“once my country recognizes, along with its government, the justice owed me by my services“

Rosas was buried in the Old Cemetery and laid there for many years until a nationalist and revisionist movement grew in Argentina, especially in the 1920s and 30s. In the 1930s, the ‘Pro-Repatriation of Rosas Committee’ was founded; however, little was achieved due to WWII and the Perón presidency’s reluctance to involve themselves in the issue.

It was not until 1989 that Rosas’ body was repatriated to Argentina. Preceded by an enormous and elaborate funeral cortege, Rosas body was laid to rest in his family vault at La Recoleta Cemetery, to this day, Rosas remains a controversial figure across Argentina.

Absent dictators aside, Southampton cemetery is a fine example of a fascinating and historically important cemetery in need of constant care. However, as long as the Friends are nearby, I have every faith in its preservation.

For more images, visit my Facebook page Burials And Beyond

One thought on “A Day at Southampton Old Cemetery”