Taphophobia. The fear of being buried alive. The subject of nightmares since time immemorial. With today’s modern medicine, there’s little chance of these fears becoming reality, however, for many centuries, it was a very real threat.

In 1896, social reformer and bearded anti-vaxxer (those have existed for centuries too) William Tebb, co-founded the London Association for the Prevention of Premature Burial with fellow germ-denier Walter Hadwen. The association campaigned for burial reforms to ensure the dead were truly, irrevocably dead. Due to the catatonic side effects of diseases such as cholera and malaria, newspapers were filled with accounts of prematurely buried individuals, subsequently dying in unimaginably traumatic ways.

‘WeirdHistorian.com’ cites an instance from the July 22nd, 1890 edition of ‘The Undertaker’s Journal’ where a woman was buried alive –

‘The body of a woman, named Lavrinia Merli, a peasant, who was supposed to have died from hysterics, was placed in a vault on Thursday, 3rd July. On Saturday evening it was found that the woman had regained consciousness, had torn her grave-clothes in her struggles, had turned completely over in the coffin, and had given birth to a seven-month-old child. Both mother and child were dead when the coffin was opened for the last time.’

Together with Edward Perry Vollum, who was nearly buried alive himself, the two men published a book titled ‘Premature Burial and How It May Be Prevented’. The work consisted of suggestions of safety measures and several accounts of individuals later being discovered to have been buried alive. The association distributed this work alongside others of a similarity, such as ‘A Plan for Forming Associations for the Prevention of the Burial of Persons Alive, by an Army surgeon, and The Absolute Signs of Death, and the Prevention of Premature Burial, by the eminent British physician, Sir Benjamin Ward Richardson, F.R.S.’[1]

However, ‘Premature Burial’ is the most gripping of all the Association’s efforts. It remains in print to this day and is as frightening to the contemporary reader as it would have been to the Victorian taphophobe. The Paris Review recorded the lasting horror in these accounts of suffering. ‘There’s the man who sank into such a prolonged lethargy that he was thought dead until he “broke into a profuse sweat” in his coffin; the young woman whose corpse was exhumed for reburial only to be discovered “in the middle of the vault, with dishevelled hair and the linen torn to pieces … gnawed in her agony”[2]

If anything, the work concerns itself with exhumation as much as it does interment, suggested than many Victorian cemeteries were hives of questionable activity throughout their working day!

Considering that death and burial weren’t widely regulated industries, many accounts of premature burial occurred because of misdiagnosis of death by a non-medical individual. Subsequently, the association repeatedly campaigned for parliament to put new regulations in place, requiring a medical professional to confirm death before the body was handled by an undertaker. Previously, death certificates had been widely issued by doctors who had not examined the body, which seems utterly ludicrous to our modern sensibilities. After years of efforts, Tebb was still frequently dismissed by the wider medical community and remained a staunch campaigner for burial reform until his death in 1917. In Tebb’s will, he explicitly stated that his body could only be disposed of following ‘unmistakable evidence of decomposition’. He was cremated a week after his death. 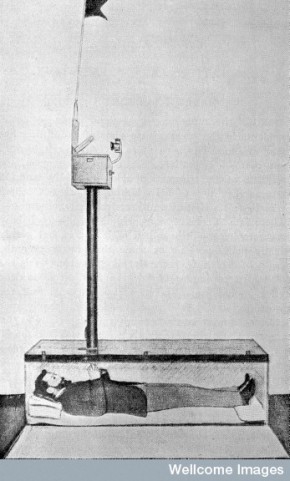 Tebb’s death aside, premature burial required very real preventative inventions. In the 19thcentury, this commonly took the form of elaborate coffin mechanisms. The second version of ‘Premature Burial…’ included a handful of elaborate coffin mechanisms to assist the nearly-dead. The first, by Russian Count Michel de Karnice-Karnick, was presented in 1897 following his supposed experience of witnessing a Belgian girl be buried alive. Tebb and Vollum describe the invention as follows –

“…it consists of a long tube, about three and a half inches’ diameter, and a hermetically-sealed box.  The tube is fixed into an aperture in the coffin as soon as the latter is lowered into the grave.  No gases can escape from the tomb into the outer air, as the metallic box into which the upper end of the tube enters cannot be opened from the outside.

On the chest of the supposed dead body is placed a glass ball, several inches in diameter, attached to a spring which communicates through the tube with an iron box above ground.

On the slightest movement of the chest’s wall, as in the act of marked breathing, or movement of the body, the glass ball releases a spring which causes the lid of the iron box to fly open immediately, thus admitting both air and light to the coffin.  At the same time a flag rises perpendicularly about four feet above the ground, and a bell is set ringing which continues for about half an hour.  In front of the box, an electric lamp burns which gives light after sunset to the coffin below.  The tube acts as a speaking tube, and the voice of the inmate of the coffin, however feeble is intensified.”[3]

In short, Karnice-Karnicks invention is an elaborate jack-in-a-box system. However bizarre the mechanisms sound, the coffin system was tested and proven to be a great success when tested on the living. Yet while the dead do not breathe, they decompose. While the glass ball was supposed to be activated by breathing, it was equally as efficient at detecting the bloating and rotting of the dead. To avoid a run of unnecessary exhumations and cemetery flag-flying, the invention was not a success.

Before complicated coffin systems, earlier methods of prevention consisted of a simple cord attached to a bell, or similar method used to attract outside attention. Flags, ladders and minor explosions were all popularised, but most had foregone the inclusion of a breathing tube, making them all rather redundant.

In the 1820s, so-called ‘portable death chambers’ were popularised in Germany. These chambers were constructed over open graves and were furnished with a bell and viewing window. If the bell was rung, the body could be immediately exhumed, meanwhile ‘watchmen’ could peer into the chamber to search for signs of decomposition.

In 1829, fellow German Dr. Johann Gottfried Taberger invented a system of strings and bells attached to the body’s extremities. Yet, as with Karnice-Karnick’s later invention, natural decomposition and shifting of the body could frequently cause false positive results, rendering the bells, once again, inconsequential.

Several other inventions, including one in 1995 that required an intercom system, were patented, but ultimately proved pointless. There appear to be no official records of anyone being saved from a safety coffin and the western popularisation of embalming rendered any chance of post- ‘death’ survival ultimately impossible.

However, the fear remains. Despite modern medicine and developments in burial reform, the terror of waking up in a coffin is perpetually repeated in popular culture. Most recently, the horror film ‘The Nun’ featured coffin bells as a questionable plot point, and Buffy the Vampire Slayer herself had to fight her way out of a coffin in the 2000s. As long as we fear the grave, our dead will never truly stay buried.

2 thoughts on “Buried Alive! A short history of premature burial and safety coffins”