The Victorian ‘cult of death’ is a term often thrown around. We use the word ‘cult’ as though all things macabre were worshipped and accepted without question. We consider post mortem photos, hair jewellery and elaborate monuments of proof they were celebratory of all things decidedly finite and mortal. However, as much as burial was an elaborate and sentimental affair, there were deathly alternatives a little too ostentatious or simply odd for Victorian palettes.

In 1848, Albert Fisk submitted a patent beginning ‘Be it known that I, ALMOND D’. FISK, of the city of New York, in the State of New York, have invented a new and useful manner of constructing an Air-Tight Coffin of Cast or Raised Metal.’[1]

Was it new? Absolutely. Was it useful? Arguably. Was it popular? Not in the slightest.

Fisk’s ‘metallic coffin’ was a remarkably simple invention, intended to aid the death industry and public health in general via the airtight preservation of the dead. Fisk’s mummy-shaped casket was intended to preserve the body in cases of delayed burial, prolonged periods of travel and also to keep all bodily effluence and disease contained within. Considering highly contagious diseases such as cholera were very real threats from poorly maintained burial sites, Fisk’s invention was an attempt at counteracting the ever-growing issue. 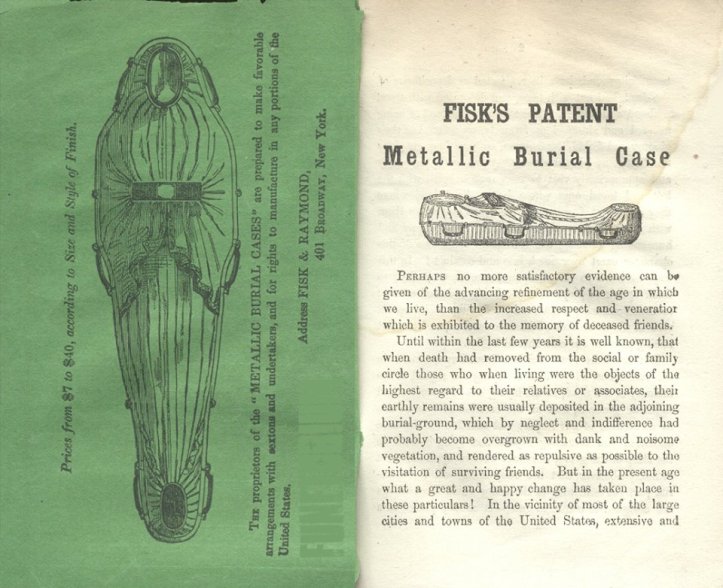 In the western world, cemetery sanitation was increasingly problematic, especially in overcrowded city cemeteries. In 1839, London sanitation reformer George Walker wrote that ‘The vast numbers of burying places within the bills of mortality are so many centres of foci of infection – generating constantly the dreadful effluvia of human putrefaction.’[2]Therefore, while Fisk’s invention looks more than a little eccentric to modern eyes, his intentions were at least well-directed.

The metal contraption could confine putrefaction to its own little space, preventing leakage into the surrounding soil. However, it was also intended to offer the opportunity to preserve the body, in a suspended state of decay.

Fisk’s patent explains that  ‘the air maybe exhausted so completely as entirely to prevent the decay of the contained body on principles well understood; or, if preferred, the coffin may be filled with any gas or fluid having the property of preventing putrefaction.’

While self-contained putrefaction is a delightful topic in itself, the Fisk caskets did have several glowing reviews (primarily provided by company associates). In rebutting claims of malfunctions, Raymond & Co (producers of the casket at the time) were keen to voice their triumphs in transporting the dead cross-country. Writing to the New York Times, a representative exalted their successes.

‘Perhaps no more notable occasion or severe test was ever applied than in the case of the transportation of the remains of the Hon. Henry Clay from Washington, during the hottest weather in July, with many delays to their final resting places in Kentucky, which was done to the entire satisfaction of the Senate Committee who had the matter in charge.’

Sealed caskets and preventative burial measures continue to be controversial today – death is finite and decay inevitable, yet many unscrupulous funeral directors suggest a casket with a rubber seal to be most ‘respectful.’ In short, preservation of the deceased body is not a new concern. No one especially likes the thought of their loved ones rotting, however it was the very humanoid shape of the Fisk casket that unnerved the grieving public. The metal was cast in such a way that the shape mimicked that of a shrouded body, complete with all the details of draped fabric. On top of this were symbolic embellishments (angels, flowers, berries) that were ubiquitous in the world of Victorian mourning.

But also, most unnerving of all, these coffins had a viewing window; directly over the face. This was intended so that mourners could again glance on the serene (definitely not hideous and rotting, no sir) faces of the deceased. As successful as the caskets may have been in their preservation, needless to say, it didn’t catch on.

An Atlas Obscura article commented that ‘people found it all a little unsettling, especially the uncanny, otherworldliness of the metal case like some Industrial Age warping of Ancient Egypt.’[3] 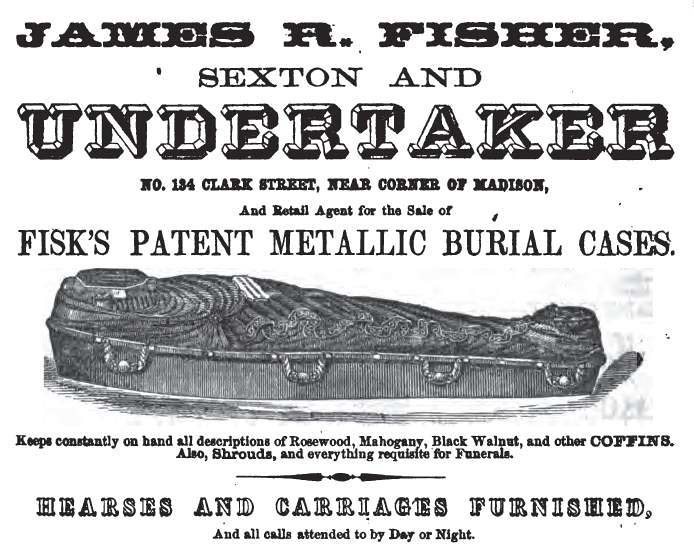 A reported side effect of Fisk’s sealed coffins were the issues arising from a build-up of gasses within the sealed case. Namely, explosion.

A letter written to the Cincinnati Enquirer in December 1868 delivered a gruesome account of a malfunction.

‘An iron coffin was procured, the body placed in it, and the lid sealed and screwed down in the usual manner with a thick glass plate over the head. To those who watched the loved face through tears, there soon appeared a singular change; the veins of the forehead began to swell, and soon stood out like cords. Then the face began to swell and soon the eyes partly opened and the lips fell apart, giving to the face a wrathful, horrifying expression that was painful to look upon. These changes continued until the dead seemed to be striving to breathe and speak, and strange noises were heard inside. Women shrieked and fainted, and at last a cloth was thrown over the glass, and persons were forbid looking in. During the night of the second day (if I remember correctly), an explosion occurred, accompanied by the sound of broken glass, and it was found that the plate, over the face, was shivered, and the room filled with the most sickening stench. The dead body was horrible to look at, and it required no active stretch of the imagination to believe that life had returned and a struggle ensued.’[4]

While this story (and several other similar ones) was circulated country-wide, there is a concern that such claims were urban legend. But despite this, scientifically speaking, it isn’t too far from the truth.

The production of Fisk’s mummies ended after several years (approximately 1853/60 due to varying reports) and few examples remain in American museums today. Considering that most examples were buried underground, this isn’t a great shock.

However, those unearthed through cemetery redevelopment and clearance are met with fanfare and broad interest, primarily due to the state of preservation. Not just the unusual contraption.

A Fisk casket was unearthed from an unmarked grave in Washington and examined by a Smithsonian laboratory in 2013.

‘Owsley, head of physical anthropology at the National Museum of Natural History, said the body was well preserved. The young man wore a shirt and vest, pants and drawers, all hand-sewn, as well as a pair of socks. Only the socks appeared machine-made.’[5]

While Fisk’s efforts were admirable and certainly striking from an aesthetic viewpoint, Victorian society just wasn’t ready for an influx of iron mummies. However, viewing windows, (or ‘skull portholes’, as they really should be called) have dipped in and out of popularity ever since – primarily for ease of viewing during a wake or funeral.

However, Fisk cases that made their way above ground are celebrated in the various museums and funeral homes they find themselves in. While they may not ever fall into favour, they remain one of the most interesting, elaborate burial choices in recent centuries. And they look rather good too.

Many pictures taken from: https://www.facebook.com/funetorium/

And the Simpson Funeral Museum – http://www.simpsonfuneralmuseum.com/museum-information/