The winter of 1979 was the coldest for 16 years and broke records for both cold temperatures and snowfall. From January 12th-14th, a winter storm left the UK blanketed in an estimated 18.4 inches of snow.

It was also the Winter of Discontent, when industrial action (or inaction?) brought the UK to a standstill.

Over several months, there raged a devastating series of strikes that changed the face of British politics forever. After the labour government implemented pay caps in an ongoing dispute with the Trade Unions, professions as far removed as nurses to waste collectors all went on strike, withholding their services in lieu of a wage increase. Eventually, the year lost 29,474,000 working days to stoppages.

The strikes began at Ford motors, as workers demanded a 30% increase, following a very successful year that saw the managing director receiving a pay increase of 80% and millions of pounds worth of profits for shareholders. After Ford workers were offered a 5% increase, as opposed to their requested 30%, strike action was arranged and a mass walkout began.

This had a snowball effect, with trade unions across the country implementing strike action, threatening to return the UK to a 3 day week. Soon enough, blockades and new committees were implemented, controlling the lorries that entered certain towns and cities.

This posed a problem for industries such as pharmaceuticals and farmers, who required large amounts of animal feed. The latter saw farmers picketing union buildings, flanking the building with rows of animal carcasses. The strike action of waste collectors in the capital saw rubbish piled five feet high, the likes of which had never been seen before. Strikes over wages became pickets, pickets became blockades and the series of events brought the nation to a standstill.

James Callaghan, the serving prime minister at the time, was widely criticised for his handling of the situation, especially in the midst of the lorry drivers strike. After returning from a summit in Guadeloupe, he held a press conference at the airport, dismissing suggestions that the UK was in chaos and made jocular remarks about his experiences of swimming in the Caribbean. The labour governments treatment of the Winter’s problems (and decision not to hold a general election in 1978) would ultimately prove deadly for the party. Images from the strike action, especially that of mounting rubbish piles would prove to be integral in the conservative party’s election campaign, joined with their damning phrase ‘Labour isn’t Working’. The conservative government, led by Margaret Thatcher, took office at the next election.

When Liverpool’s gravediggers went on strike in January 1979, they became the tabloid’s sacrificial lamb for the country’s problems.

Having never been on strike before, 56 gravediggers and crematorium workers (members of the GMWU in Liverpool and in Tameside near Manchester) withheld their labour, stating that their profession was unappreciated, demanding pay rises and changes to their awful working conditions. It remains undoubted that the conditions in which these gravediggers were working were unsafe, unsanitary and sub-par for any manual worker.

A Liverpool gravedigger speaking at the time said:

‘When you dig a new grave, you are covered in mud and slime. I have lost count of the times when the earth around me has caved in while I’ve been digging. Just when you think you’ve finished, you find yourself up to your neck again in mud. Every day of your life, you run the risk of being trapped and smothered.’

Running headlines such as ‘Now They Won’t Let Us Bury Our Dead!’, the gravediggers’ strike was demonised and received far greater backlash than any other industrial action.

Forty years later, many of those who lived through the strike are unwilling to talk about it. Union activist and GMB convenor at the time, Ian Lowes, still defends the gravediggers’ actions, but shudders at the memory of the time.

“It was ‘enough is enough’ by low-paid workers who were treated like dogs.” But he promises: “Never again.” (The Mirror, 2019) 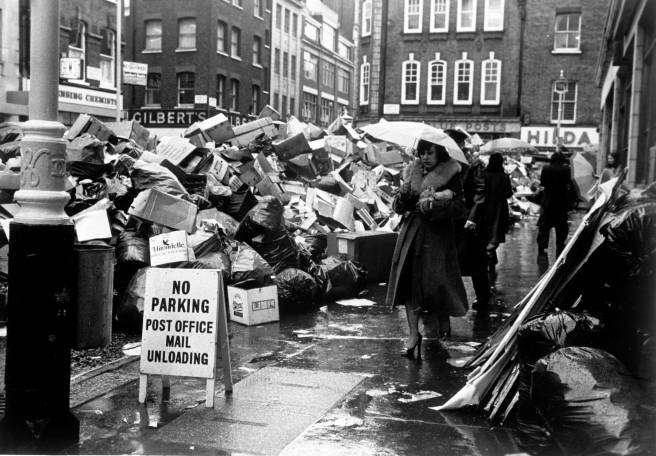 Prior to the gravediggers’ strike, Ford workers had settled on a 17% pay rise and tanker drivers received a 20% increase. However, further picketing to increase the national minimum wage to a £60-a-week-minimum heightened the gravediggers’ discomfort as it was practically double their weekly earnings.

Today, if a strike is to be held, a union is obliged to run a secret ballot beforehand. Before this, unions implemented decisions on a majority show of hands. In Liverpool Council’s Parks and Gardens Department, gravediggers and crematorium workers of Allerton Cemetery and Springwood Crematorium were called out on a show of hands and simply walked out of their jobs.

In a retrospective Mirror article, they recall that, ‘Leaders of the Liberal-run city council begged the men to go back, the chief executive anticipating media malice with a plea, “Even in war they stop to bury the dead”.

Upon hearing the news of the strike, a GMB official visited Liverpool and demanded that the workers return to their posts. Predictably, he was not met with warmth.

With no one to bury or cremate the dead, bodies were piling up. To ease the strain on funeral homes, Liverpool City Council hired a factory in Speke to store corpses until they could be safely buried. On average, 25 bodies were added to the backlog, with the Department of Environment noting that on one day, there were upwards of 150 bodies stored at the Speke warehouse. Such arrangements led to inflammatory words in the Commons, with Tory MP Anthony Steen[1]calling the setup:

‘Repugnant, an outrage to human decency… This strike offends against the dignity of man and is a horrifying example of man’s indifference and inhumanity to the dead.’

Similarly, a vicar speaking in 1979 said in his sermon:

‘When gravediggers will allow corpses to mount up rather than carry out their duty, I detect the underm­ining of the whole structure of our society.’

It leads one to think; if gravediggers and crematorium workers are regarded to be unbelievably important; the gatekeepers of morality and the custodians of our nearest and dearest, then why on earth did we (and continue to) regard them so poorly?

For £35 a week, Liverpool’s gravediggers had worked in all weathers without protective clothing and were forbidden from entering the canteen on their break. Instead, tea was brought to them on a dump truck and they ate around an open hole.

Gravediggers have long been defined by their profession in the publics’ eye, tasked with assisting the grief-stricken, but dismissed in the process.

Former gravedigger Dan Flew, states that these national views have not yet resolved.

‘At the time I was a grave digger, it was a kind of 50/50. The richest of people looked down on us and could be extremely rude while the more working class treated us like humans.We were seen by the council as the people who would do the work that others wouldn’t, but also a job for idiots.’

The Civil Contingencies unit had to look for new options and the press were watching. On 1st February, a journalist persistently asked Dr Duncan Bolton, Liverpool’s Medical Officer for Health, what would be done should the strike continue indefinitely. In a fluster, Bolton stated that burial at sea could be an option (due to his days in the Navy) and it soon was plastered across front pages. While sea burials were never implemented, it was one of many avenues considered. Other options were deploying the army, private contractors and allowing the bereaved to dig their own family’s graves.

In the warehouse at Speke, bodies were sealed in bags that kept the deceased preserved for up to six weeks. As the strike did not last anywhere near as long, the issues arising around the storage of the dead were clearly matters of aesthetics and personal frustrations, rather than a national emergency or sanitary concern.

The retrospective Mirror article claims that some cremations (for those whose bodies could not be embalmed) were held after hours at Springwood Crematorium, conducted by unpaid volunteers.

Unfortunately, the striking gravediggers did not only have to contend with the press, but aggression from their own communities. There was verbal abuse, physical attacks and threatening letters all thrown the way of the working men. One individual was attacked in a pub and taken to A&E where he was deliberately ignored by staff, despite NHS workers also being in dispute at the time.

After ten days, the workers reconvened and decided to return to work. Of all the industrial action of 1979, their strikes were said to have not so much hit the government, but affected everyday people, which was never their intent.

The gravediggers eventually settled for a 14% pay rise, although the wider damage done lingered for some years afterwards. Images of locked cemeteries joined pictures of mountains of rubbish in the Tories political campaign and Thatcher swung into power on an anti-union wave.

Many unions blamed the gravediggers’ action for the resulting Conservative laws that forbade their previous methods of striking, for which they may be correct. Death and treatment of the deceased will forever invoke strong views, yet why must cemetery workers be dismissed when they too are necessary in the running of a supposed civilised society.

Today, 18 workers tend the six cemeteries in Liverpool and there have been no strikes since. They can also finally enjoy their tea in the warmth of the canteen.

“This was all about a group of low-paid people fighting to try to get a better deal. They had a right to withdraw their labour but, when they did, the consequences were terrible.” (Ian Lowes, 2019)

Want to read more about the Winter of Discontent?

[1]  The MP later found fame for claiming £87,250 expenses for his country home in Devon, where he moved after losing his Scouse seat. (source: Mirror)

One thought on “Crisis, What Crisis? The Gravediggers’ Strike of 1979”