In my search for loosely Easter-related graves, I came upon the website of Nutfield Genealogy; an impressive work of local and family history, based in New England. In amongst articles of local family history, I found the fascinating account of Nancy Luce.

Nancy Luce is buried in the Cemetery of West Tisbury, Massachusetts and is somewhat of a local curiosity. A simple, short grave, it was never intended as a local tourist site or curiosity. However, over the years, chicken toys and figures were placed beside her grave and – over the decades – a big stone likeness of a hen, found its place on top.

Nancy died on April 9th, 1890, aged 73 and lived rather a sad existence. Nancy grew up on the small island of Martha’s Vineyard, where she is still regarded as ‘the chicken lady’ to this day.

Born into wealth, Nancy should have had an easy life. However, she contracted an illness in her early years – now regarded to be Lyme disease – leaving her with life-long disabilities. When she was 27, her mother died and by 31 her father died. The neighbours promptly tried to steal her inherited property. Despite legally winning her case and retaining her property, the small community turned against her and Nancy spent the rest of her days in isolation and poverty.

For company, Nancy may not have had humans, but she had her chickens (bantam hens). After her parents’ death, she stopped riding horses and dedicated herself to the care of the farm animals, regarding them as close friends. Aside from the chickens, a particularly beloved pal was a three-legged cow named Red Cannon.

Nancy was utterly devoted to the wellbeing of her animals and supported her menagerie from the funds of a small shop on her grounds. Here, she sold tobacco (which she gained through trading knitted stockings at the nearby town), chickens’ eggs and her books.

According to Nutfield Genealogy, her chickens ‘had odd names like Toona, Otte Opheto and Tweedle Dedel Bebbe Pinky.’

Upon the death of her chicken, Ada Queetie, she penned this mournful poem:

Poor little Ada Queetie
She used to do everything I told her,
let it be what it would,
And knew every word I said to her.

If she was as far off as across the room,
And I made signs to her with my fingers, She knew what it was, and would spring quick and do it.

If she was far off, and I only spake her name, She would be sure to run to me at a dreadful swift rate, Without wanting anything to eat.

I used to dream distressing dreams,
About what was coming to pass,
And awoke making a dreadful noise,
And poor little Ada Queetie was making a mournful noise,
She was so worried for me. 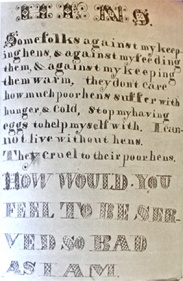 When a chicken died, Nancy orchestrated elaborate funerals with a casket and tombstone for each deceased bird. Sadly, many of these were later stolen and used as doorstops, but thankfully, most were given to the town library after her death. I for one am very disappointed at the lack of a chicken graveyard.

Locally, she was regarded as an eccentric and even insane. She was also somewhat of a businesswoman as well as a folk artist and poet, being the first female entrepreneur of the island. In the shop, she kept herself and her chickens afloat by writing about her chickens, producing little books for passing tourists. She was also frequently photographed with her chickens – even paying for professional portraits of her and her flock –  becoming a tourist stop in her own right.

Nancy died on April 9th, 1890 and, around the same time each year, more chicken figures are placed by her grave. John Alley, superintendent of the West Tisbury said to the Vineyard Gazette that:

“I don’t understand the chickens, but I see them each year. Each year they come but nobody really knows who is bringing them…Maybe so she’ll feel less alone.”

Nancy’s grave is rarely lonely today, and her story and passion for poultry lives on in the memory and museum of Martha’s Vineyard.