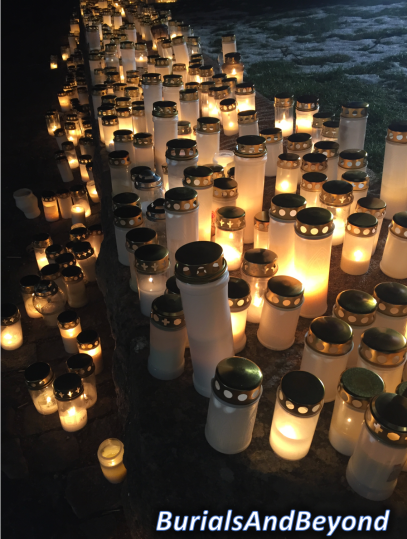 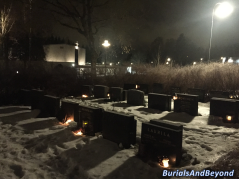 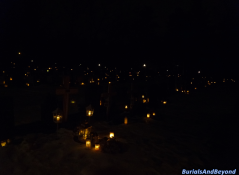 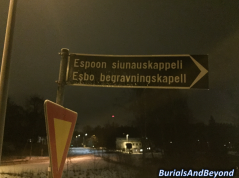 As ‘Burials and Beyond’ is first and foremost, a personal blog, I hope you’ll indulge me as I recount my recent experiences in Finland, remembering the dead at Christmas-time.

On Christmas Day 2017, I found myself not at home with my family, but around 1000 miles away in Helsinki, Finland. It is a long-standing tradition among Finns to visit cemeteries around the Christmas period and I for one was more than happy to take part.

The majority of Finnish families (reports quote as many as three quarters) visit the graves of loved ones on Christmas Eve, leaving candles and paying their respects to their dead loved ones. This was our original plan.

I would love to say that my friends and I joined the crowds on Christmas Eve, but owing to a mutual hatred of crowds and an adoration of mulled wine, we waited until the 25th to make our trip to neighbouring Espoo. Besides, Christmas Eve was already filled with a huge meal, festive drinks, a trip to the sauna with a festive cider… not to mention the arrival of Joulupukki (Santa Claus), so we were more than a little strapped for both time and sobriety.

However, on Xmas day itself – a day usually reserved for visiting family and recovering from the previous day’s frivolities – we hopped on a bus and began the short journey to neighbouring Espoo. It should be said that I had been spending the festive period in the company of two Finns, both of whom had loved ones buried in the same cemetery, making our journey not simply a tourist exercise, but a personal and purposeful one.

After leaving the bus, armed with backpacks filled with knitwear and candles, we made our way through the snow towards Kappelin hautausmaa (The Espoo Chapel Cemetery). There could be no mistaking as to where the cemetery lay; as we walked the curving roads towards the gates, the warm glow of thousands of candles cast unmistakable shadows across the trees. The whole scene would have been decidedly dramatic and gothic, were it not for my propensity for sudden, sprawling meetings with the ice underfoot.

We entered the cemetery around 5pm in pitch darkness (such is Finnish weather), and I was unsure as to who, if anyone, we would encounter in our wanderings. While I obviously can’t comment on the experiences or intentions of all visitors at this time, the atmosphere of the cemetery was not especially sombre. As we made our way down the snowy tracks, we encountered several families with children in tow, some chasing toddlers, some talking intently with one another. There was certainly no hard-kept silence, rather pockets of visitors going about their business in whatever way they saw fit. There was a distinct sensation of individual purpose during our visit – each visitor interacting with no one outside of their group, quickly tending to their own specific plot among a multitude of identical headstones. Far more families than I anticipated were taking time out of their celebrations to visit the cemetery, making such a tradition seem somewhat ageless and very much active, rather than some dying (pardon the pun) practise. As Finns make visits to their living family around the Christmas period, it was evident that those who have died are not neglected.

The prevalence of the practise is evident all throughout the lead up to Christmas, most notably through supermarket shelves. Homeware sections, from supermarkets to corner shops, have their space dedicated to a variety of grave candles, from elaborate glass affairs with angels and metal hearts to multipacks of candles in plastic tubes. The latter, plastic-tubed, traditional grave candle was very much the popular ‘standard’ choice across cemeteries. Despite contemporary connotations of candles with Christian practise and remembrance, the Finnish tradition taking candles to graves across ‘Christmas time’ is not an exclusively Christian act, but is practised across all faiths. Many pre-Christian belief systems held ideas that the souls of the dead were closest to the living around the time of the winter solstice.

While no-one is able to pinpoint the origin of their use in cemeteries, the popularity of grave candles in Finland appears to track back to the 1920s. At this time, candles had become more affordable to the masses and, following the Finnish Civil War, were placed on the graves of soldiers.

This Finnish relationship with death, or memorialisation to be more precise, appears to be a far more accepting and active one compared to that of the UK.

A 2015 report by Perfect Choice Funeral Plans claimed that ‘half of Britons do not visit their deceased relatives’ resting place.’ Reasons cited ranged from ‘lost track of time’ to ‘too upsetting’, yet the outcome is the same. Ultimately, with or without a central family focus on the deceased, upkeep ultimately passes over to local authorities and similar organisations to maintain the environment around them. Most cemeteries within the UK do not employ the practise of re-using grave plots after a set amount of years, as it continues to spark outrage within certain communities, with buzzwords such as ‘desecration’ and ‘grave robbers’ scattered with wild abandon (see links below).

As Kappelin hautausmaa was not a historical cemetery, the practise of re-using plots is widely employed. Subsequently, most headstones were decidedly uniform, being simple and squat in appearance. In Finland, plots are not owned, but ‘rented’ for 25 years, after which the family may renew their lease for a further 25 years. Depending on the cemetery and age of the plot, families may opt to include multiple burials within their 25 years, as there is often space for multiple embalmed bodies and cremated remains (as is most popular in Finland, with FuneralBusinessAdvisor quoting an ‘85% cremation rate’). As turnover is high, there are regulations in place in terms of headstones and there were few artistically remarkable memorials within the cemetery. This is not to say that the simplicity of family plots to be without merit; it is within the simplicity of the lone family name that I personally felt most potency.

As I watched my friends kneel and balance flickering candles against the impacted snow, I couldn’t help but feel in awe of this communal relationship with death. My trip to Espoo was indeed a great visual experience, but more importantly, enlightening. I found that, even if it occurs just once a year, a community – however scattered – can interact with death in such an easy, simplistic, positive, way.