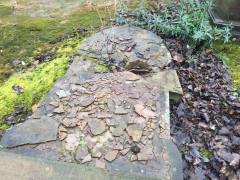 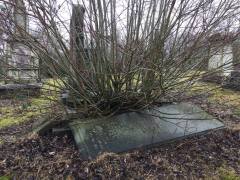 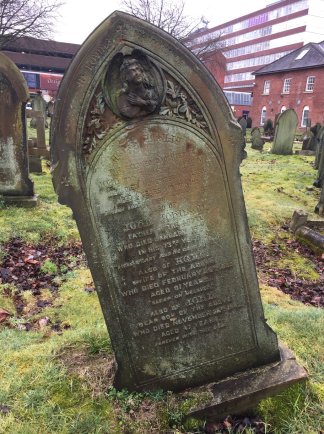 Slanted grave due to coffin collapse.

When searching for cemeteries and memorials, ‘Catacombs’ and ‘Birmingham city centre’ aren’t the most obvious bedfellows. Take the time to stroll into the jewellery quarter and you’ll find a little death-y treat, slap bang in the middle of all your diamond shopping needs.

Indeed, alongside Cadbury’s chocolate, Industrialisation and Black Sabbath, Birmingham can boast of bearing catacombs. Small, but beautifully formed. Don’t get your hopes up by expecting some labyrinthine, beautifully preserved affair, complete with tour guides and postcards at the gift shop. Birmingham’s catacombs are small, blocked up, shielded from view and not for those of clumsy disposition. Or those of us with easily-triggered vertigo! Nonetheless, they’re well worth a visit if you find yourself in the black country.

Warstone Lane Cemetery (also known as Brookfields, C of E or Mint Cemetery) was established in 1848 by a private company to cope with the overcrowding of cemeteries that was commonplace throughout much of the 18th and early 19th centuries.  It was initially intended as a burial ground for Anglicans, but, as with most city burial grounds, this was not strictly enforced as time progressed. The last internments were made in 1982, meaning that little is done to the cemetery in terms of upkeep and preservation; that is not to say the place is going to rack and ruin, but it is evident how few graves are regularly visited by relatives. However, during our brief walk around the grounds, we saw a number of flat topped tombs used as informal dining tables for workers on their lunchbreak. It was nice to see engagement and an element of non-destructive activity within the cemetery ; the workers’ setups seemed rather ingenious and not at all disrespectful. Warstone Cemetery, clearly has changing usages and is ingrained into the fabric of the surrounding area.

A short internet search will furnish you with a list of notable burials, such as – Harry Gem (a 19th century sportsman with excellent sideburns), Clement Ingelby (Shakespearian Scholar – sideburn status, unknown) and John Postgate (Surgeon and food safety campaigner. Fluffy sideburns.)  In order to stay true to my ‘casual’ writing style, (and as my trip was unplanned), I sought out none of these. You’re welcome.

However, it takes little more than a short wander around the cemetery to find a number of interesting tombs, memorials and carvings that would keep the casual visitor interested for hours.

Personal favourites of mine included:- 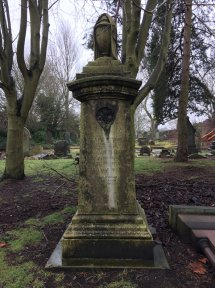 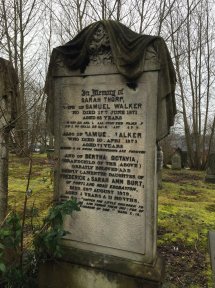 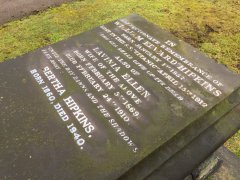 Hipkins had been a successful engineer and the main initiator of the formation of the University of Birmingham’s Business School.

The upper section of the cemetery is filled with simplistic chest tombs, hence the propensity for passing workers to utilise their makeshift picnic spots. Several of the larger examples are family vaults, most with short histories recorded on the side.

In-between pockets of tombs and vaults, there are a number of beautifully sculpted urns, obelisks and a snaking line of ledgers above the catacomb recess, commemorating civilians who died during the war. There are broken columns galore and a lot of granite. So mind your step if its wet when you visit!

While headstones and tombs are the bread and butter of a taphophile’s day out, I found some of the most interesting features in Warstone Cemetery to be of relatively ‘natural’ formation. To reiterate; Warstone, although no longer a working cemetery, is not abandoned, but has suffered from neglect over the years. The first feature to capture my interest resembled rows and rows of uneven, fresh graves. 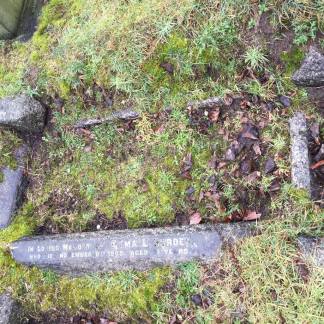 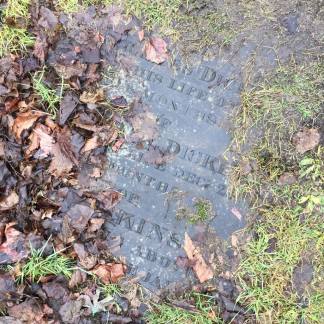 As I entered the cemetery, I was met with rows of tilted headstones, each looming over a deep trough of dead leaves. These brown recesses gave the contradictory appearance of being freshly dug, but, due to the weathered headstones, simultaneously old and abandoned. These jaunty rows appeared to be more noticeable in the upper, and subsequently older part of the cemetery. These graves that have not been backfilled since the initial coffin collapse (often hundreds of years prior) – leading to an interesting topography of deep ditches, particularly on the side of the cemetery closest to the station.

Naturally, the key attraction at Warstone Cemetery is its tiered catacombs. These were initially constructed as a means of absorbing the site’s existing sandpit into the environs. (Warstone and Key Hill Cemetery were built on hillsides that had been quarried for sand, later used in the metal casting process.) 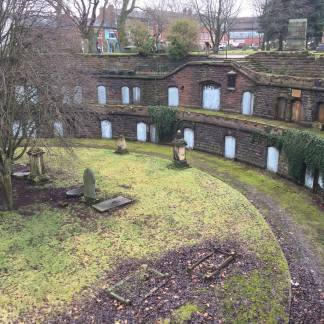 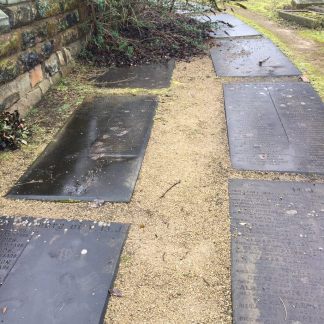 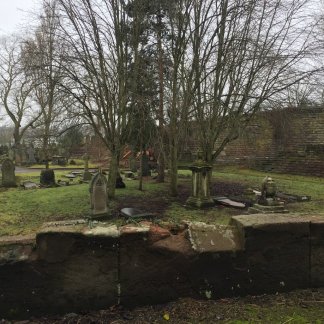 While this added a few extra family vaults – creating a three-storey cemetery of sorts – it cannot be deemed to be a space-saving construction. However, is has been recorded that the unpleasant vapours exuding from said catacombs resulted in the instigation of the Birmingham Cemeteries Act, meaning that all coffins that were not directly interred should be sealed with pitch or lead.

Sadly, the catacombs themselves are no longer directly accessible to the public; you can stroll along the paths, read the inscriptions, but the tombs themselves are now fully sealed.  I am to understand they’d previously been open to the public, but have found no photographic or first hand evidence of this. Nonetheless, many of the entrances are now an attractive shade of concrete.

Upon approaching the catacombs, there is a circular plot, surrounding a central grouping of beech and pine trees. The burials within it are all pleasant enough, as are the ones flanking either side of the entrance and beside the ominously buttressed wall. There are easily accessible stairs to the side of the catacombs, so access is easy enough, HOWEVER, if you plan on visiting, there are no safety precautions once the stairs have been ascended. The structure is as it always was, which is utterly refreshing in today’s cemetery environments where headstones are regularly laid flat at the slightest sniff of a slant.  The catacombs are shown as they were intended to be; not to overstate it, but as a certain amphitheatre of death. Conversely, a stone surface, 9 feet up high, thick with moss, isn’t health and safety’s best friend. There is no railing on the top level, meaning that one wrong step close to the edge could result in your own internment if you’re not careful. So, enjoy the view, keep your eyes open and don’t be an idiot.

At the top of the catacombs sits the tomb of businessman John Baskervillle. While his name lends itself to the famous typeface, the story of his death, or rather the treatment of his corpse, is far more interesting. I’ll try to provide a short summary, however I urge you to follow the further reading links at the bottom of the post. When John Baskerville died in 1775, he was a very successful and wealthy man, but also a confirmed atheist. In his will, he provided strict instructions as to the treatment of his body. Baskerville was not only buried upright, but in an air-tight lead-lined coffin. Initially, these wishes were carried out and old Baskerville was interred in a small mausoleum in the grounds of his house Easy Hill, where he rested for many years. However, in 1821, workmen digging for gravel disinterred Baskerville’s coffin, where is subsequently laid unclaimed by relatives. As Baskerville was unwanted and an outspoken atheist, no cemetery would inter him and his decayed body created somewhat of a quandary. For several years, it rested in the warehouse of Thomas Gibson, the man whose business stood in the place of the old Baskerville House. Being an entrepreneurial sort, Gibson would occasionally open Baskerville’s coffin to curious visitors at the cost of 6d a peek. Oweing to Baskervilles method of burial, he was remarkably well preserved. A visitor, Thomas Underwood, sketched Baskerville’s body in August 1829 and recorded that –

“his body was, after forty-six years underground, in a singular state of preservation. It was wrapped in a white linen shroud with a branch of laurel, faded but firm in texture. The skin on the face was dry but perfect. The eyes were gone, but eye brows, the eye lashes, lips and teeth remained. The skin on the abdomen and body generally was in the same state with the face. An unpleasant smell strongly resembling decayed cheese arose from the body, and rendered it necessary to close the coffin quickly.”

Visitors notwithstanding, being stored in a warehouse didn’t suit the fast-putrifying businessman and Baskerville soon changed hands. Plumber John Marston soon found himself the new guardian of Baskerville and was decidedly less conscientious about opening the coffin. Soon, visitors to his corpse (oh yes, there were still visitors) were overcome by the smell of putrefaction and Baskerville had to go. At this stage, Baskerville’s state was less than pretty, but still, no-one would bury his remains. After a series of underhand machinations on the part of Marston, Baskerville was buried in the catacombs beneath Christ Church. However, Baskerville was denied his rest once more when Christ Church was demolished in 1899 and he – along with 600 other internees – was finally laid to rest at Warstone. His one wish of rejecting burial on consecrated ground was not to be. Today his manhandled remains have the best view of the cemetery, which, although pleasant. No doubt would have provided no small comfort.

As I left Warstone via the gatehouse, I believed that no memorial could top the unexpected wonder of the catacombs. However, as I made my way towards the gates, I found myself drawn to a stunningly unique memorial to the Sutcliffe family – a literal family tree.

The monument is a perfect example of the late 19th century naturalism movement by taking the form of a tree stump. The stone trunk stands beautifully stark against the ‘standard’ headstones around it and is the most unusual ‘small’ memorial within the entirety of Warstone. The Sutcliffe tree lists the names of the deceased at irregular intervals, and at jaunty angles, as though they had been carved by young lovers. Sutcliffe’s work is not just a feat of cemetery masonry, but is a beautifully considered piece of sentimental art. Erected in 1888, it was designed and erected by LW Sutcliffe and seemed to  – initially – be conventional in its listing of deceased ‘kindred’.  However, the latest addition is the most emotionally charged, being a eulogy for his eldest son, Isherwood Edmonds Sutcliffe who had died as a result of wounds received in France in 1916.

While Warstone has its fair share of supposed hauntings (an obligatory ‘grey lady’ and a lost WW1 soldier), its appeal lies firmly in the stories left by the living and the remarkable ways by which nature shuffles its way through established structures.

(Sketch image courtesy of the above)