To those travelling down the Mansfield road in Nottingham City, Rock Cemetery is little but an unassuming fence and a few wonky headstones glimpsed between the iron bars.

Yet venturing through its unassuming gates, Church, or ‘Rock’ Cemetery as it is most commonly known, its 13 acre site is anything but subtle and understated. 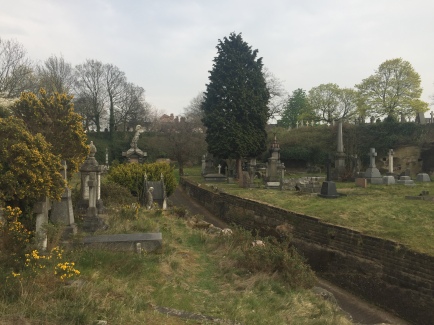 The cemetery began construction in 1851 (although didn’t open until 1856) following the enclosure acts of 1845. Church Cemetery, like many other cemeteries of this time, was created as a result of overpopulated city burial grounds.

However, unlike many other city grounds, its construction was not straightforward. The land, backing on to The Forest and Mansfield road, was uneven; filled with hollows and very fine sandstone rock. Being previously used as a sand pit and a working landscape for mills and farming, the cemetery had to compete with unusual features.

The ground held a large pit of sorts, now named Saint Anne’s Valley. This hollow is now connected to the main grounds by a tunnel and is one of the main geographical draws of the cemetery. Much like Birmingham’s Warstone Cemetery, this large pit can be seen from above as a 20ft sheer drop, and is a health and safety nightmare. Previously, this hollow was open to the public by means of a large ramp, but decades of dodgy cemetery partying has resulted in a large metal gate blocking the way, with access regulated by official tours alone.

The Valley is a beautiful structure, and although not exclusively constructed by cemetery workers, its walls and structure was strengthened by the cheap labour of the city’s poor. Subsequently, this valley mainly contains pauper’s graves, with lists of names peeking out from huge slabs, nestled in the grass in rows. Beneath these slabs lie up to 20 bodies; a harsh contrast to the enormous granite monoliths above. Among the names of poor adults lie rows of heart-breaking reminders of historical infant mortality. Names followed by years become months and days, with some names carved next to mere hours of life. 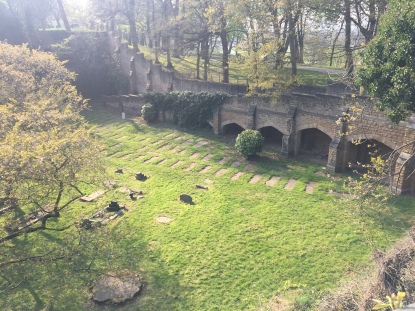 To see these headstones today, your only option is through the caves via a pre-booked tour (or death-defying parkour over the enormous walls). Nottingham itself is famous for its extensive underground cave systems, used for transport, business and nefarious activities for centuries. Much of Nottingham has been quarried for sandstone since the medieval age and that from Church Cemetery was so prized due to the very fine nature of its sand. This sand is ideal for glass-making, and with Nottingham holding innumerable pubs and drinking dens…glass was always in ready demand!

The legend of Robin Hood also feeds into Church Cemetery, with one of the larger caves popularised as once being used by Hood to stable his horses. While these timelines don’t marry up exactly, what’s a little factual inaccuracy to a local legend?

The caves themselves are interesting for their very presence, the height at which miners reached and for their basic geological features. There’s also some questionable graffiti and candle holes to seek out. However, unlike other cemeteries boasting caves, Church Cemetery’s caves are little more than a by-product of industry. They were never intended to hold the dead and are by no means catacombs. Nonetheless, the landscape of the ground is beauteous to behold – its rising hills and hollows certainly make up for the lack of subterranean, cavern burials.

While the cemetery boasts no phenomenally famous residents, it has an overwhelming number of beautiful headstones and a great many notable Victorian philanthropists and businessmen. A mere few of note are:

Marriott Ogle Tarbotton (1834-87), engineer and father of the Trent bridge.

Watson Fothergill (1841-1928) architect of many of Nottingham’s most beloved gothic red brick buildings.

Edwin Patchitt (1808-88)Solicitor and designer of the cemetery.

But to name a few! 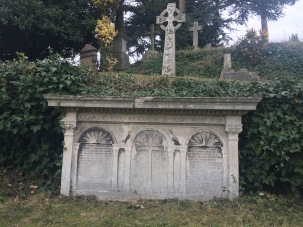 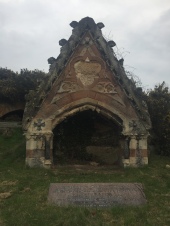 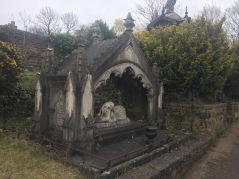 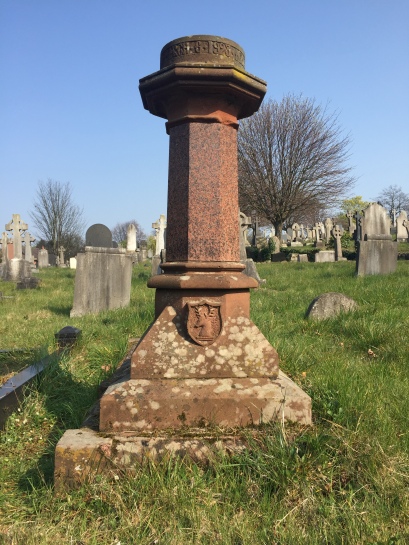 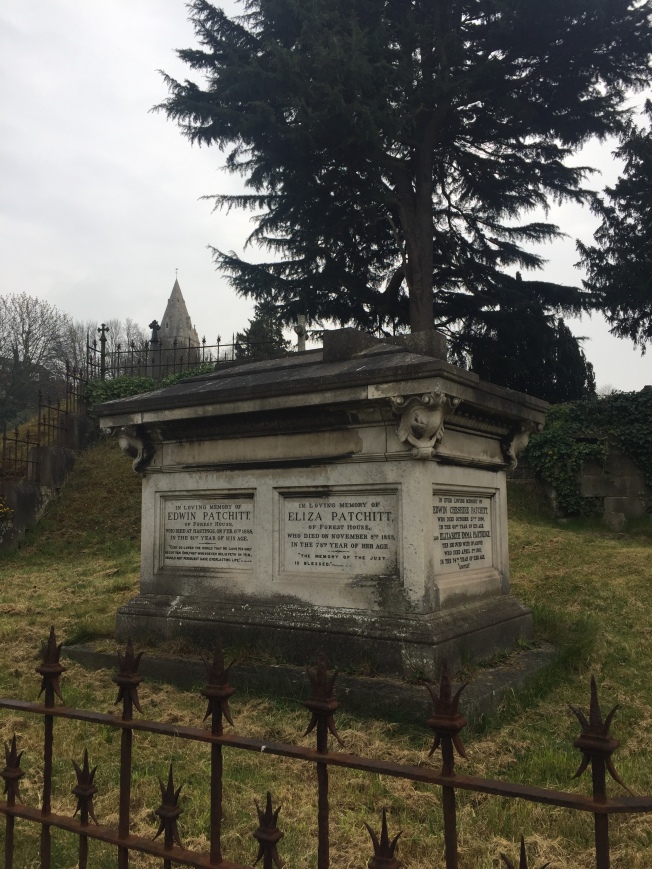 If turning left by the main gate, the cemetery unfolds into a veritable runway of enormous white angels and figurative monuments. The variety of sculpture no display could easily match if not better many of the UKs more well-known burial grounds. Many of the angels are variations on a theme; identical feminine figures pointing upwards or bowing in lament. However, the most poignant of this is arguably that of Thomas Cutts Seal, whose angel is particularly large and lifelike and carries a baby. Seal’s wife Helen died ages just 29, and the very next day, his only child Nellie, followed, aged 3 years and 5 months. He then married Eleanor Ellen, who was similarly struck down in her prime, aged just 30. Thomas died aged 52, and was outlived by his third wife. Nonetheless, burying two young wives and a child certainly puts our modern health privileges into perspective. 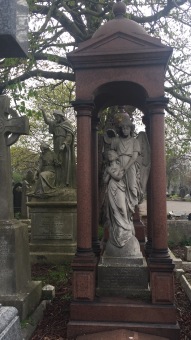 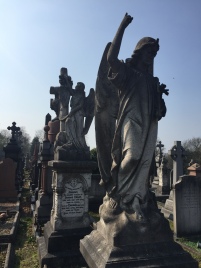 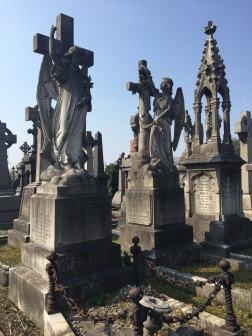 To the right, curving down towards the cave entrances, leads to another wealth of huge family monuments, each more bizarre and larger than the one before.

Behind all these is a small wall of battered square inlets that look to be little more than pieces of hanging rubble. However, after climbing higher above the family vaults, the sandstone walls reveal a former columbarium of sorts. The rows of organised, square niches once held the cremated remains of the deceased. In front would sit a granite plinth carved with names and dates, as with headstones, but much of this is long gone. Some time ago, a group of vandals came to believe that treasure lay within the niches and systematically smashed through the wall of cremated remains. It goes without saying that the vandal was met with little more than ash, but their lasting damage remains. 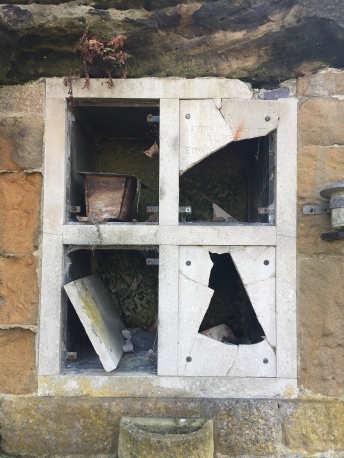 For a city centre cemetery, Church Cemetery is indeed a hidden gem. With a huge variety of monuments, headstones and history at your fingertips, its worth a day trip in itself, even if you aren’t fortunate enough to catch one of their rare tours.

All photographs taken by myself, unless otherwise stated.