The 11th February marks the 157th anniversary of Lizzie Siddal’s death. While not exactly a household name, she is an icon, a muse, an artist and a beautifully tragic figure of the Victorian art world. Similarly, while the 157thanniversary of anything isn’t cause for great celebration, it is a welcome chance to introduce Lizzie to a new audience.

Like most women with an over-dramatic bent, I have had an affinity for Pre-Raphaelite muses since my teens. Lizzie Siddal with her flame-red hair and tragic life, became an icon of my own. Her life was fraught with turmoil, betrayal and beautiful art; she was celebrated as a model and is immortalised in some of the world’s most famous artworks.

Elizabeth Siddal was ‘discovered’ in her youth by the artist Walter Deverell, who saw her working as a shop girl in a milliner’s. In 1850 Deverell went on to paint her as Viola in Twelfth Night, however she was quickly accosted by the Pre-Raphaelite brotherhood, with whom she sat for several seminal works. Through her association with the group, she is most commonly known because of her depiction of Ophelia by John Everett Millais. Famously, while sitting for Ophelia in an iron bath, the candles warming the water extinguished. While Millais was too engrossed in his work to notice, Lizzie was too dedicated to complain, and as a result of her silence, she developed pneumonia and lay close to death for several weeks.

Siddal has long been a tragic, romantic figure due to her association with Dante Gabriel Rossetti, a pre-Raphaelite artist, poet, and philanderer. Their relationship was intense, dramatic and troubled; they were involved on and off for over a decade, before they finally married. Following the trauma and depression following a stillbirth, Lizzie’s addiction to the opiate Laudanum spiralled and she died in 1862, aged just 32. 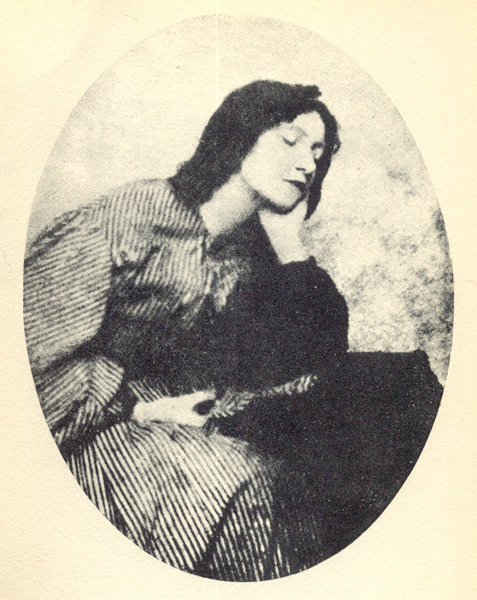 Lizzie was buried in Highgate Cemetery in the Rossetti family plot. She shares her resting place with Dante Rossetti’s parents, sister Christina and several other family members.

Dante, wracked with guilt and sadness, buried Lizzie alongside the only manuscript of his poems, tucked into her auburn hair. This was supposedly a last sign of devotion from her straying husband, an apology for what trauma he may have caused and that the finest of his works would lay with her, and her alone, for all eternity.

However, Lizzie’s undisturbed sleep only lasted for several years, before Rossetti’s ego came knocking. His unpublished works troubled him and, under cover of lamp light, Lizzie was exhumed. Rumour spread that when her coffin was opened, it was filled with her endless, flowing red hair that had continued to grow after her death.

While this is a biological impossibility, the image caught hold in the public imagination and only helped to increase her post-mortem longevity in popular culture.

When Rossetti himself died in 1882, he was buried in Birchington-on-Sea in Kent and Lizzie was free from any further disturbance.

In 2012 I took a long-overdue trip to Lizzie’s final resting place at Highgate Cemetery where her grave, now off the beaten path, covered with dead leaves, was only accessible by special request of the tour guide. Nonetheless, to see her name in stone and to be able to pay tribute to a life cut short was worth the train fare alone.

Elizabeth Siddal’s life is so fascinating and varied that I implore you to read some of the following links to learn more about her. While a tragic figure, primarily defined by the male gaze, she was an artist and a writer in her own right and deserves to be more widely appreciated.

[Should you wish to visit Elizabeth’s grave – Old Highgate is now too overgrown and brittle for visitors to enter unattended, but tours are frequent and many of Highgate’s highlights are offered. But the urge to run off unsupervised, like a naughty morbid toddler is almost unbearable.]

http://fannycornforth.blogspot.com(Primarily concerning Fanny Cornforth, but is an excellent resource and Kirstie’s books are great reads.)

One thought on “Elizabeth Siddal – The Exhumed Muse”