For forty days it will remain

St Swithun’s day if thou be fair

The 15th of July, St Swithin’s Day. The day when we celebrate our favourite historical Bishop of Winchester and plan our umbrella usage for the next 40 days.

But why do we celebrate this day? And why do I insist on being unnecessarily bizarre in my description of public holidays?

All (some) will be revealed.

St Swithin (or ‘Swithun’, depending on your Anglo-Saxon preference) was the bishop of Winchester from 30thOctober 852 until his death on 2ndJuly 863. Despite having his own day in UK calendars, relatively little is known about the bishop’s acts and lifetime. A passage in ‘The Lives of the Saints’ records him as being ‘placed at an early age in the monastery of Winchester, where he was distinguished by his humility, and his application to study.’ And that he ‘was ordained priest by Bishop Helmestan in the year 830.’ However, it was his death and burial, rather than his life, that instigated miracles, saintly acts and an overlooked national celebration.

In 971, more than a hundred years after Swithin’s death, Dunstan and Æthelwold of Winchester chose him to be the patron of the restored church at Winchester. Before this, the bishops grave was largely forgotten, and was only rediscovered in the 10thcentury. This elevated the dead bishop’s status and required the removal of his body from his grave to its new resting place within Æthelwold’s new basilica. It is here, during the re-interment of the body, that several miracles were said to have taken place.

Before exploring Swithin’s burial, it should be noted that in posthumous accounts of his life (that are of questionable authenticity), there is an account of the miracle of ‘The Winchester Egg Woman’; that the bishop miraculously restored a basket of eggs that had been deliberately destroyed by cruel workmen. It may not have been raising the dead, but we all have to start somewhere.

Upon Swithin’s request, he was buried outside of church grounds so that his body ‘might be subject to the feet of passers-by and to the raindrops pouring from on high.’. According to legend, Swithin’s body remained in its initial burial spot with little fanfare until its removal in 971. Here it was decided to move the bishop into an elaborate shrine and subsequently go against his wishes. It was said that a heavy downpour followed his disinterment, lasting 40 days and signalling the dead bishop’s thorough disapproval. 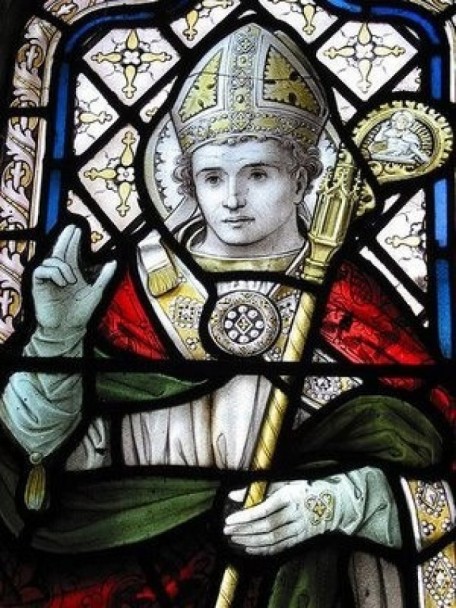 The bishop didn’t remain in his new tomb for terribly long. Over the years, his body was ‘split up’, and scattered throughout the country, such is the way of saintly relics. In the 1866 publication ‘The Lives of the Saints’, it was recorded, rather charmingly, that Peterborough cathedral ‘had an arm’.

Despite his scattered state, the tomb of St Swithin was recorded as having produced enormous amounts of miracles throughout the middle ages. The miracles were so many that the monks, having been ordered to pray at the tomb every time a miracle was recorded, were getting barely any sleep.

Sadly, the story of the shower signalling the bishop’s disapproval can only be traced back as far as the 17thcentury, but facts have never troubled the enjoyment of a feast day. The aptly named 19thcentury scholar James Raine suggested that the story of the legendary downpour originated on St Swithin’s day 1315, where a downpour was recorded by several chroniclers.

Today, the legend remains – if it rains on St Swithin’s day, the next 40 days will be damp and unpleasant. While this has never been recorded to be meteorologically true, many still take the old rhyme and superstition to heart. On 55 occasions when a wet St Swithin’s day has been recorded, 40 days of rain have not yet followed.