Medieval wall paintings. Grand, loud, bright and famous. They fill the pages of guidebooks, celebrated by tourists for centuries. They are revered, conserved and protected as relics of our past. They are never forgotten. Right?

The church of St Faith’s sits in an isolated pocket of the Norfolk countryside. Down country roads and blind bends, eventually, the little structure rises above the hedges, built a few feet above where the road now sits.

Resting in the shadows of gnarled trees and an old farm, up a steep slope, St Faiths is a modest flint-rubble building with a few later stone and brick additions. The churchyard enjoys a sparse smattering of headstones, predominantly covered by wildflowers. St Faith’s is as unassuming as possible and provides a true oasis of calm in a tangle of tarmac and roadkill.

The church’s existence is first recorded in the 12thcentury, with the later addition of a tower in the 15thcentury. However, it was the 14thcentury that saw the construction of most of the remaining structure. The church was in regular village use until the beginning of the 20thcentury, but then swiftly fell into obscurity and ruin. 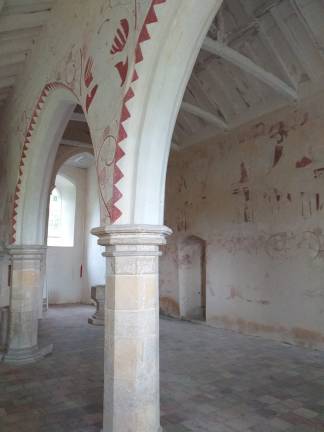 The church was locked up and all but forgotten until art historian Eve Baker, intrigued by the forgotten wreck, climbed through the window and was astounded at what she saw. While she wasn’t met with the gold and opulence of long-hidden temples and Egyptian tombs, she rediscovered an important example of ecclesiastical artwork. All interior walls of St Faiths were covered in partially-obscured but medieval wall paintings.

The wall paintings are said to date from the 14thcentury (c. 1325-50) and are in various degrees of preservation. All are rather more muted than they would have been in their prime, thanks to the white-washing efforts of the Reformation and civil war.

However, stories and likenesses are all still visible throughout the building, rendered in red ochre.

Within the arcades sit depictions of the four Evangelists (Matthew, Mark, Luke and John) and the upper part of the south wall depicts the apostles gathered around Christ. Beneath this is a series of images depicting the Passion of Christ, framed with vines.

“The first panel, which is now lost, was probably the betrayal of Christ. The first panel [sic] shows the flagellation. Christ is the central figure, the two whipping guards either side, one with his foot raised in a wicked manner. Beside it are the remains of Christ brought before the high priest, as at Grundisburgh in Suffolk. Also fragmentary is the next panel, Christ carrying his cross.”

Another wall panel depicts St George killing the dragon, yet the exact details of many other images are rather more unclear. One appears to show a ram trapped in a thicket and another, a king and priest side by side, both believed to be images from the Old Testament. Historians believe the other pictures to have once depicted St Christopher and ‘The Three Living and The Three Dead,’ a middle English poem concerning the nature and inevitability of death and judgement, all during a boar hunt. 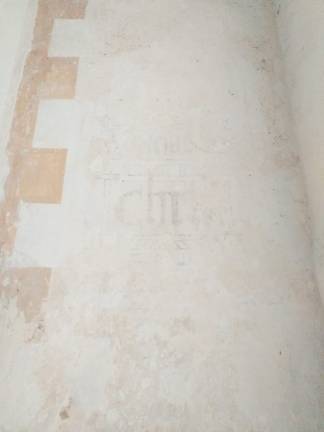 The octagonal piers (supports) and arches are decorated with chunky zig zag patterns and seem far more simplistic and chunky than the paintings we’ve come to expect in houses of worship.

But why were church walls painted at all? It’s mainly a matter of literacy. A medieval congregation would be familiar with the contents of the bible, but unable to read the words themselves. Literacy had no place in the lower classes. Subsequently, in painting church interiors with vivid reminders of saints, parables and the consequences of pious and sinful acts, parishioners would be surrounded by stories and reminders of their faith.

While the church is filled with evidence of great, sprawling paintings, the south wall is completely blank. Eve Baker believed that this wall was prepared for painting, but such plans were interrupted. The reason for this interruption is generally believed to be the black death of 1348.

Architecturally speaking, the church is of relatively standard construction, with several building stages crossing the centuries. The church has a nave, south aisle, chancel and a west tower of later construction.

Following their re-discovery, the paintings were repaired by the Norfolk Churches Trust and the Council for the Care of Churches and appear to have remained remarkably graffiti-free.

Sadly, due to the theft of floor tiles in 2008, the church is generally kept locked. However, the key is available from a holder living nearby, should you wish to visit.

The chancel and south side of the aisle have two-light windows – ‘two-lights’ being two-panelled windows separated by a mullion (a slim vertical division.) The north wall also has a mysterious blocked doorway from a previous rebuild.

The chancel contains a small fragment from a stone preaching cross, carved with an image of the crucifixion. An ancient artefact, its one of many links to history that one could easily pass by, were you not on the lookout.

If you find yourself in Norfolk, I implore you to visit. The church isn’t easily accessible to those with mobility issues, being up a small gravel slope. It also has no toilets, running water or electricity, being lit by natural light. However, it is a gem of medieval history in the heart of Norfolk. Thankfully, now under the care of the Churches Conservation Trust, the wall paintings will be monitored for years to come.

All photos my own, unless otherwise stated.