Growing up in North East Lincolnshire, I found my love of memorials by visiting my local Cleethorpes Cemetery twice a week with my grandfather. We’d visit his parents and brother, then cross over to the newer section where several of his friends were laid to rest. Towering urns, columns and weeping angels were simply another part of the tapestry of childhood, along with consuming terrifying amounts of Jaffa cakes and Club biscuits. 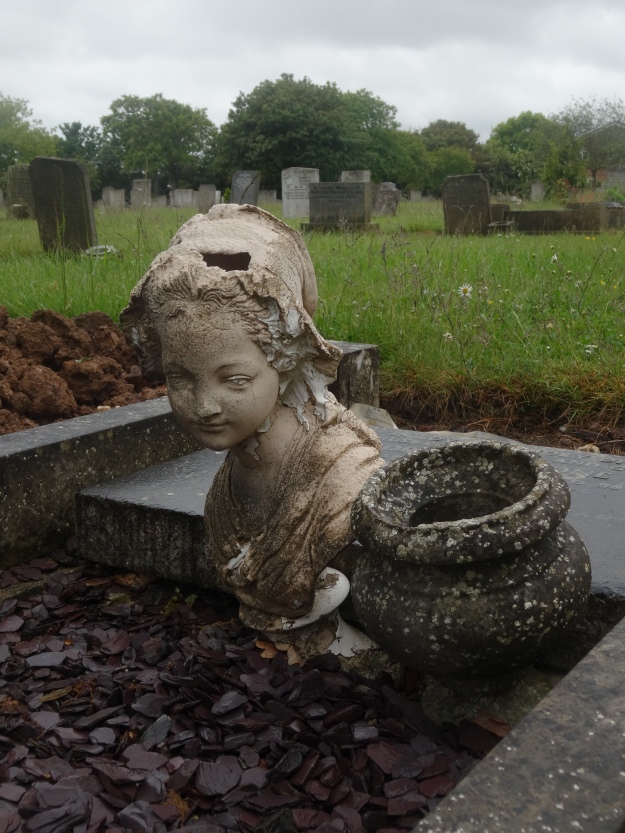 I played with the pebbles of my great grandmother’s grave and made great leaps across plots, terrified to upset the dead with my tiny feet. But as time went on and I moved away, my memories of the cemetery faded and my keenness to thoroughly re-explore it grew.

On a wet June morning, I drove back to Cleethorpes and spent a few hours in the company of the dead (who were excellent at maintaining social distancing.) 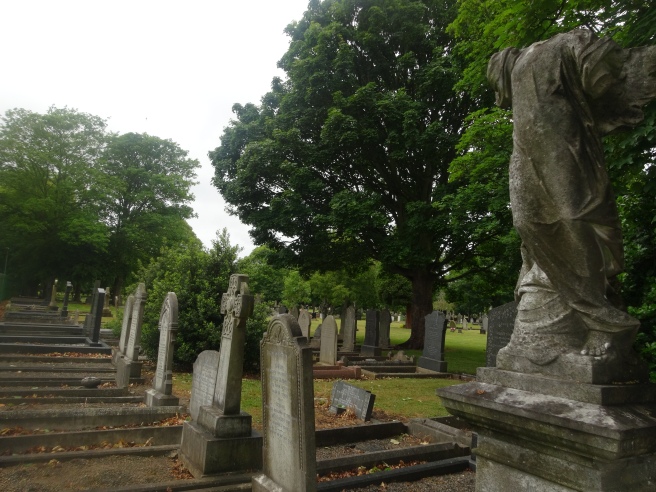 Sitting in 31 acres, just off Beacon Avenue, Cleethorpes Cemetery opened in 1877 and is one of four cemeteries serving the Grimsby and Cleethorpes area. Today, few people are buried within the cemetery, with 51 interments and 45 burials of cremated remains taking place between 2015-16.

Cleethorpes has been a popular seaside destination since the 1820s and continues to entertain throngs of tourists every year. Some of my own ancestors worked the now-defunct oyster beds on the beach and found their income in nearby coastal industries. 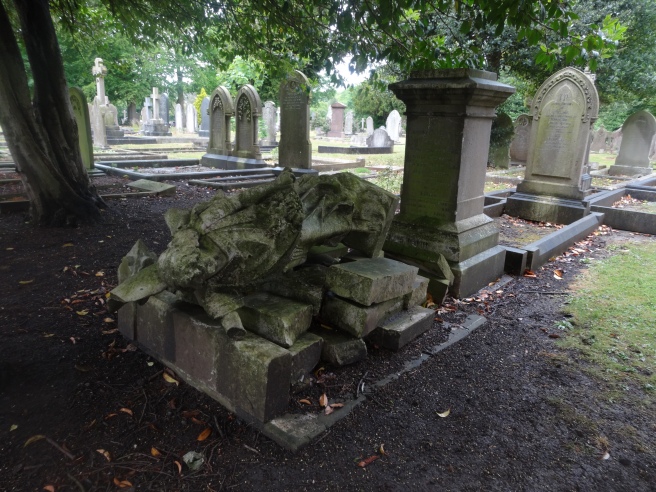 Historically, Grimsby was founded in the 9thCentury AD by a Danish fisherman named Grim with fishing remaining the town’s primary industry for centuries thereafter.

The first dedicated fish dock opened in Grimsby in 1856 and brought workers from across the country, enticed by the burgeoning industry. Between 1857 and 1863, the number of fishing vessels in Grimsby grew dramatically from 22 to 112. With boom time came more workers and more deaths. Fishing was a notoriously dangerous job, reported to be 14 times more dangerous than coal mining.

As referenced on Deceased Online, the Board of Trade at Grimsby showed that from 1881-1882, 169 deaths were recorded. The majority of young dock workers were under the age of 21 with little experience, meaning that an enormous number of sea-related headstones in the cemetery are attributed to very young men. 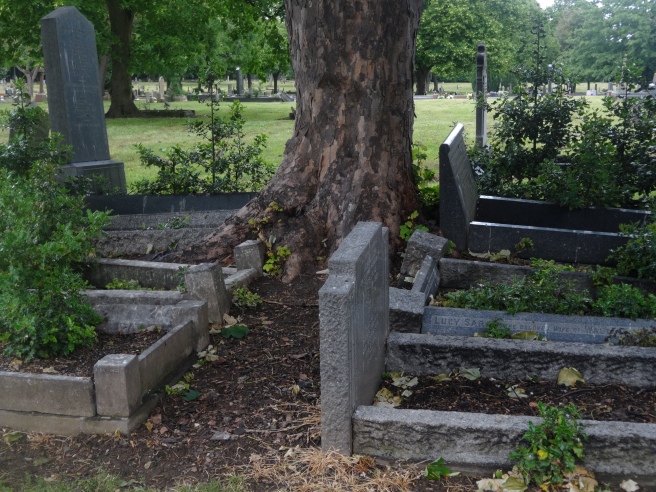 The fishing industry in Grimsby continued to thrive well into the 1950s, when it was regarded as the largest fishing port in the world. As with many coastal towns, in the decades afterwards, particularly through the 1980s, the industry went into decline; employment had to be found elsewhere and poverty, crime and unemployment flourished where the docks once bustled. Today, Grimsby remains a fishing port and the home of Young’s, but its less-than-glamorous reputation has been set in stone. 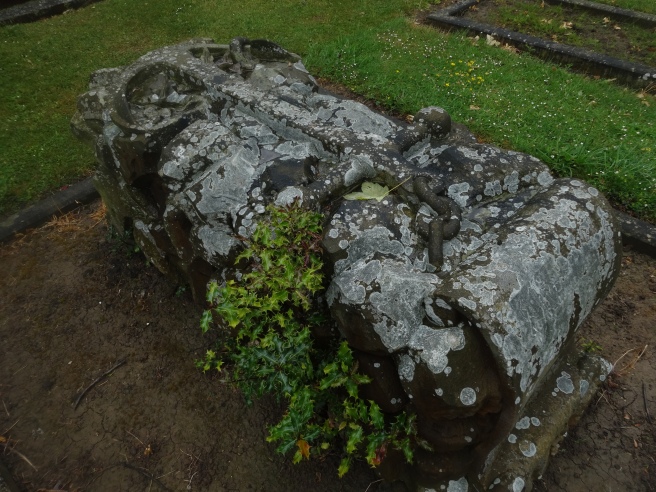 The cemetery is bisected by a foot and cycle path, with more recent burials on a raised part of the cemetery and the majority of older, 19thcentury burials in the lower part, which contains a mortuary chapel. The chapel, with a traditional arch for hearses and two small rooms, is still in use today for services. While it was not open on my last visit, from previous funeral experiences, I can recall it has a simplistic interior with traditional pews for mourners to use. Cleethorpes has long held a large Methodist community, so when searching through burial records, there can be complications in finding the full details of interments. 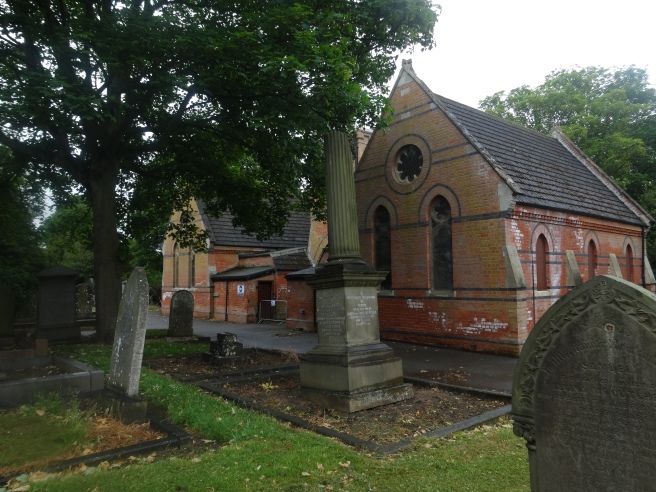 Today, plots in the cemetery are sold on a 50 year lease, whereby they may be reused, if the fee is not repaid. However, for older graves, this principle is not applied. Additionally, in December 2019, the council came under scrutiny for extensive flooding in part of the cemetery that resulted in many newer graves being cordoned off for a long period following heavy rainfall. 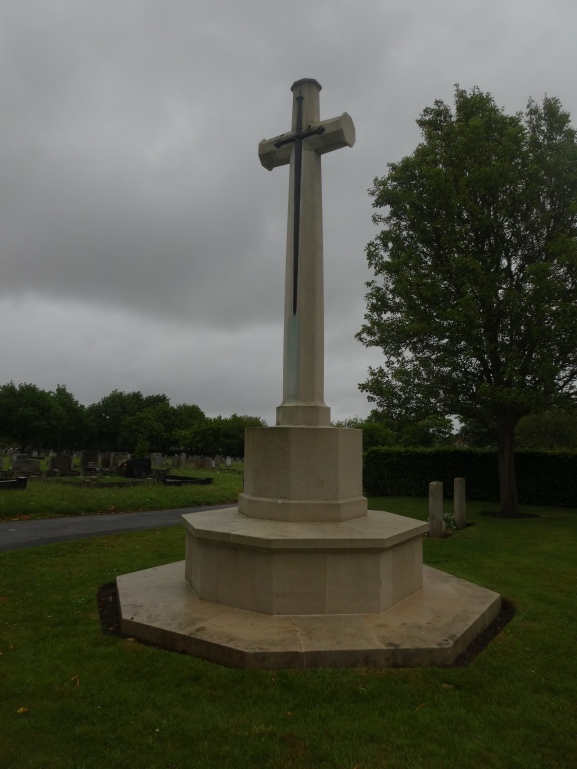 In the newer part of the cemetery, there are 77 First World War graves. 31 of these are soldiers from the 3rdManchesters that were billeted at Cleethorpes and were killed in a Zeppelin raid on 1stApril 1916. 24 of these casualties are buried under a special memorial that was erected by subscription. 6 soldiers are buried elsewhere in the cemetery and one man, Bodsworth, is buried in an unmarked grave within the cemetery. He is also named on the subscription memorial. 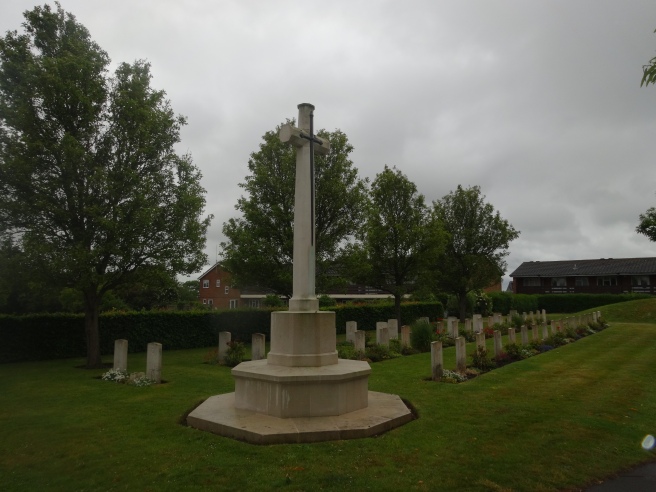 A War Cross was erected on the main drive of the newer cemetery, with 49 other headstones forming a war graves plot beside it. There are reportedly 80 Second World War burials throughout the cemetery. 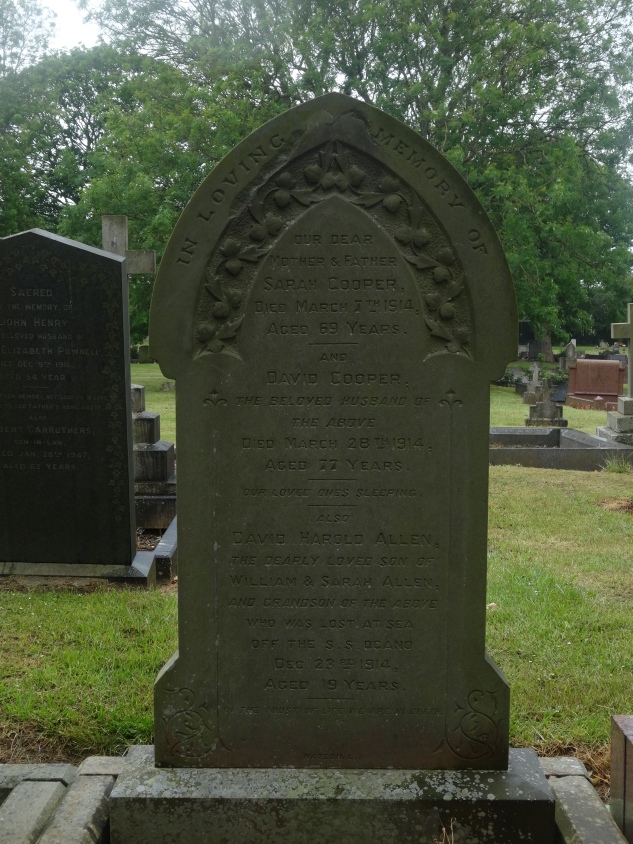 David Harold Allen was lost at sea during the first world war when the trawler ship Ocana hit a mine 75 miles North East of Flamborough Head. 9 lives were lost, the only survivor being the engineer who was found unconscious on an upturned boat by another Grimsby trawler.

David, aged 19, was a deckhand on the fishing vessel, and was but one of hundreds of trawlermen lost during the first world war. 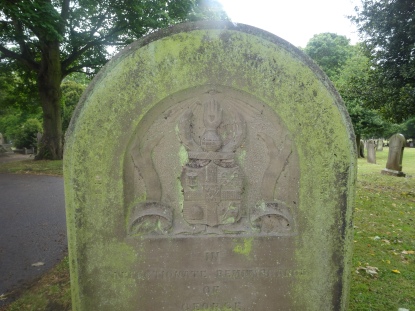 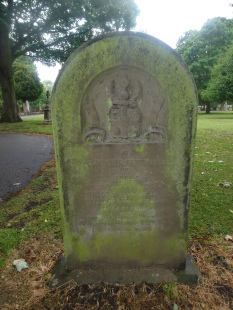 A curious feature dotted throughout the cemetery are groups of Odd Fellows headstones. The Independent Order of Odd Fellows is a fraternal order (a little like Masonic groups) first recorded in 1730 – although there is evidence of lodges earlier  in the 18thcentury. They believe in the universal brotherhood of man and the fatherhood of God and have small groups throughout the world, once including Cleethorpes. An international fraternity of lodges, they are believed to have been initially founded by men of unusual professions, who were not traditionally in guilds, hence the name ‘odd fellows’.

In the records from 1909-13, the Odd Fellows donated 4 lifeboats to the RNLI, the first of which was launched in Cleethorpes in 1868. Today, the Cleethorpes branch now appears to be defunct with no available records past 1913. 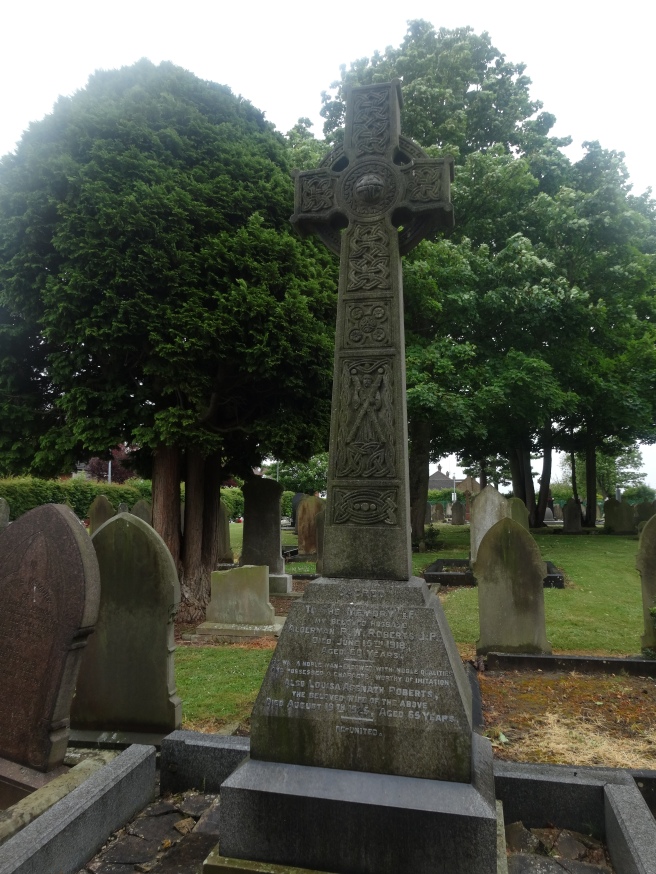 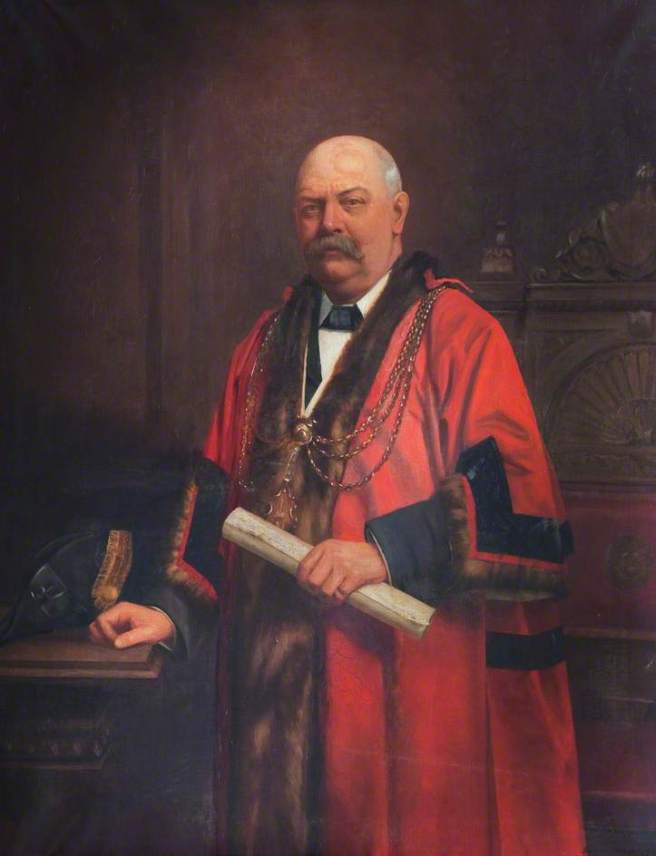 Alderman R. W Roberts was quite the local politician in his time. Roberts was a local councilman and magistrate for some time and served as mayor of Grimsby in 1909. A seemingly popular and accomplished man, he is recorded on Grimsby’s Roll of Honour (1914-1919) and was given naval rank upon his death. Today, the official portrait of Robert William Roberts can still be seen hanging in Grimsby Town Hall. 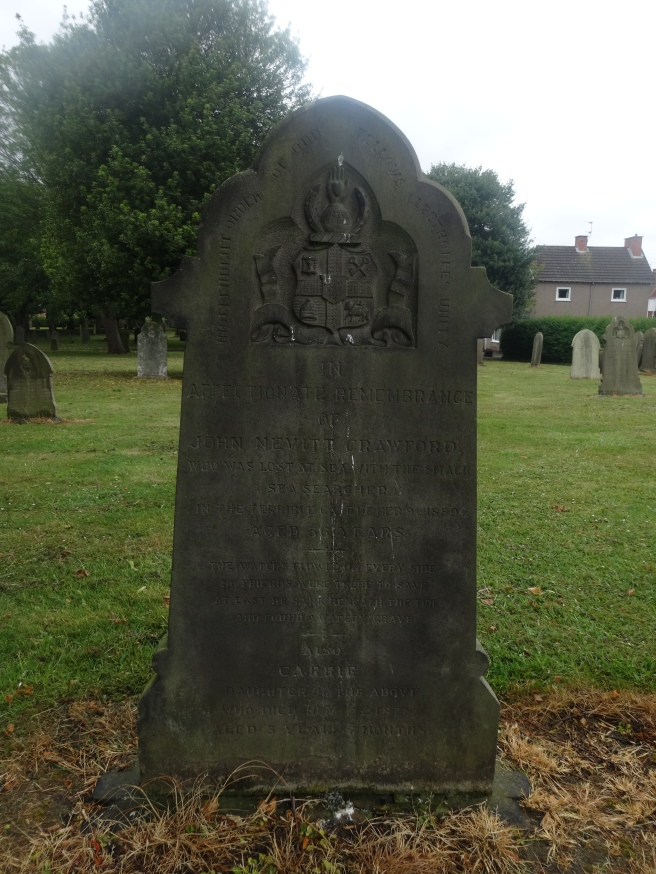 ‘The waters flowed on every side

No friends were there to save.

At last he sank beneath the tide

And found a watery grave.’

John Nevitt Crawford was not the only man lost at sea that day. The terrible gale of February 9th, 1889 resulted in a substantial loss of life, deeply affecting the fishing communities of Grimsby and Hull.

In the terrible gale, 70 died and around a dozen vessels were lost. Crawford’s own vessel, the Sea Searcher lost 5 hands which were all registered as missing, with no hope for their retrieval.

The Hull Times reported the incident on 2ndMarch 1889:

‘As day after day passes and no tidings arrive of the missing Grimsby smacks, it is beginning to be realised that the gale of the 9th ult. will prove one of the most disastrous to the Grimsby fishing trade on record. Altogether nearly a dozen fishing vessels, carrying between 60 and 70 hands, are missing.

‘Most of the vessels were provisioned for eight or nine days, and many of them have been out for over a month. Of the safety of seven of them all hope has now been abandoned.’

With so much loss of life, many breadwinners were gone, pushing many fishing families into poverty; Crawford himself left behind a wife and 3 year old daughter.

In an attempt to raise money for survivors and the families of the deceased, William Delf, a Whitby fisherman and song-writer, wrote a broadside titled ‘Three Score and Ten.’

Many of the original words have been lost to time, but the song remains popular in various incarnations with folk musicians today. So many oral traditions were lost, however the preservation efforts of the 1950s meant that the song was preserved. In 1957, a version was recorded by Mr J Pearson of Filey who was a master mariner, saving the piece.

Methinks I see a host of craft spreading their sails a-lee
As down the Humber they do glide all bound for the Northern Sea.
Methinks I see on each small craft a crew with hearts so brave
Going out to earn their daily bread upon the restless wave.

Chorus (after each verse):
And it’s three score and ten boys and men were lost from Grimsby town.
From Yarmouth down to Scarborough many hundreds more were drowned.
Our herring craft, our trawlers, our fishing smacks as well,
They long did fight that bitter night and battled with the swell. 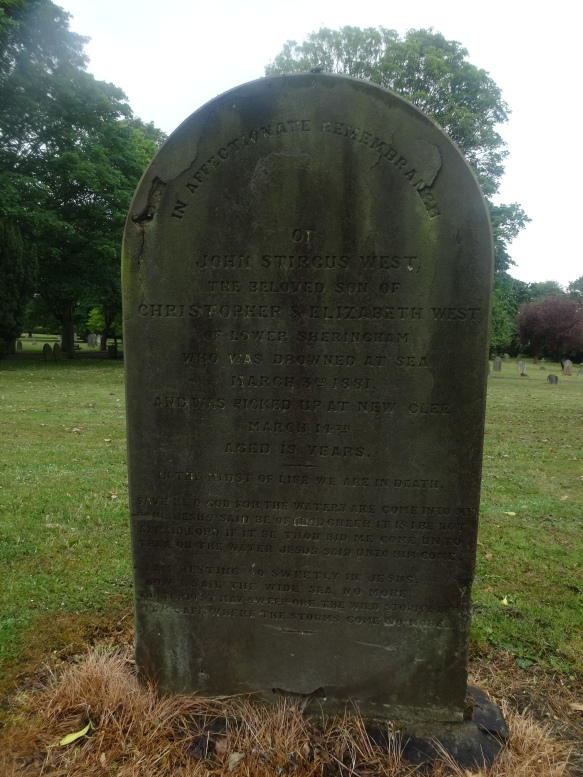 Another tragic reminder of the perils of sea-faring is the grave of John Stirgus West. Born in Norfolk in 1862, he drowned at sea on March 3rd, 1881, aged 19. His body was picked up at New Clee on March the 14th. 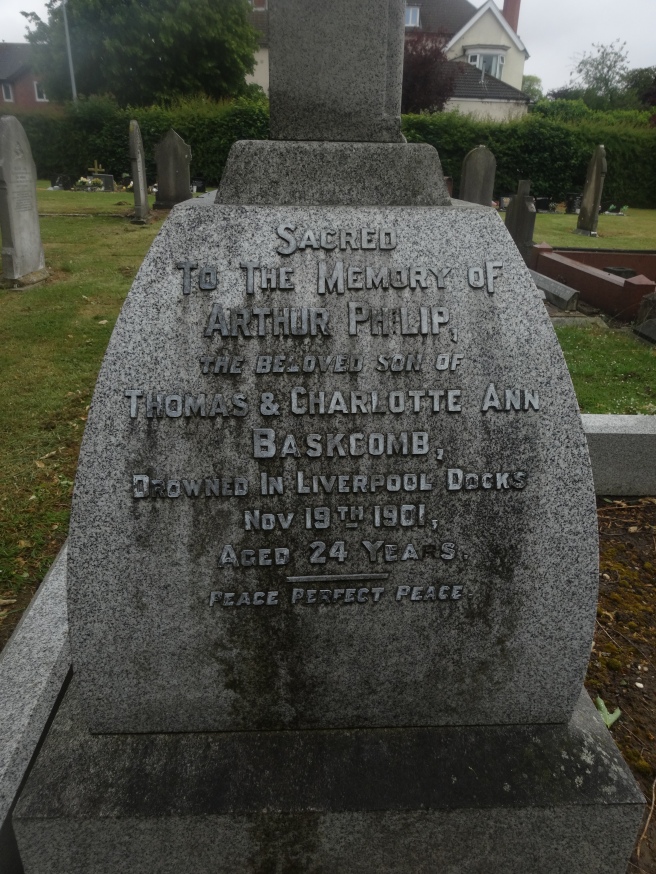 Arthur Philip Baskcomb drowned in Liverpool docks on November 19th, 1901 aged 24. Born in 1877, he is buried with his father and mother in Cleethorpes. The ship on which he died was by all accounts the St Helens, but the exact circumstances of his death remain unclear. 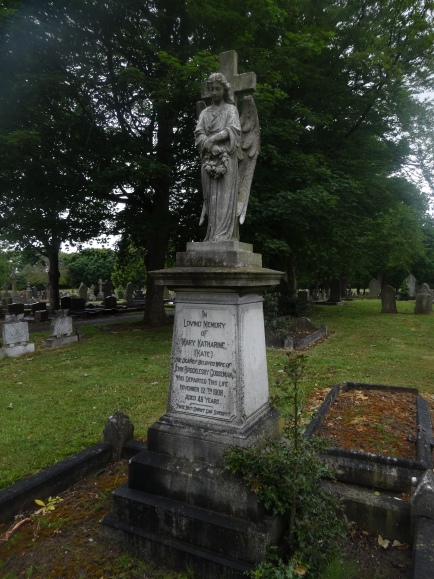 While Cleethorpes Cemetery may never rival the architectural magnificent of enormous London burial grounds such as Highgate and Brookwood, its importance cannot be reiterated enough. It is through town cemeteries and little local churchyards that the heart and history of a community can be preserved and celebrated for years to come. I, for one, will never take such a place for granted again. 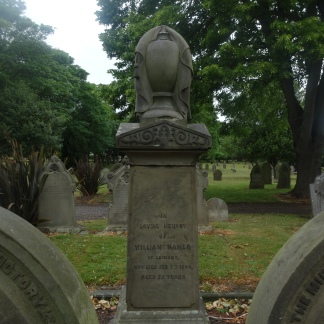 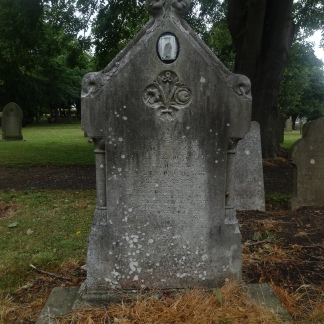 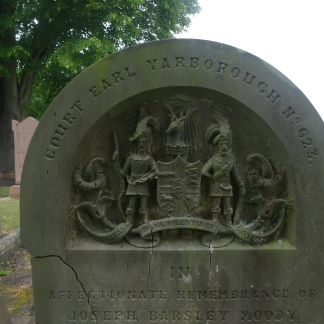 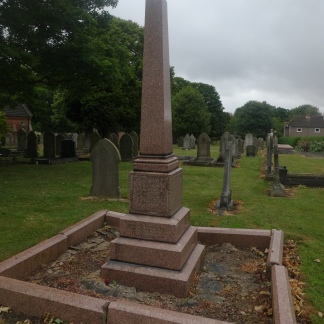