Sheffield General Cemetery: The Good, The Bad and the Granite

On the outskirts of Sheffield City Centre, beyond the eternal banks of scaffolding, beside the motorways and specialist supermarkets, lies Sheffield General Cemetery.

Opened in 1836, it was the principal burial ground for Victorian Sheffield and, upon closing for burials in the 1970s, contains around 86,000 internments. Much of the original burial ground has since been cleared of headstones and is an open, green space, filled with dog-walkers, families and the occasional early-morning drinker. The cemetery and park land has since been classified as a nature reserve, conservation area, and ‘area of natural history interest’.

Sheffield General is one of the earliest working cemeteries in the UK, opening before the Cemeteries Clauses Act of 1847, and well before many of the more famous grounds such as Highgate and Brompton. It was also one of the first privately-run, landscaped cemeteries to open outside London.

Like most city cemeteries, it was built as a response to overcrowded burial grounds; considering Sheffield’s population boom from an estimated 60,000 in 1801 to 130,000 in 1841. Following a huge cholera outbreak in 1832, many of its victims were buried in mass graves and a solution had to be sought.

In its relatively small grounds, it boasts ten listed buildings and monuments ‘including Grade II listed catacombs, an Anglican chapel, with the gatehouse, non-conformist chapel and the Egyptian Gateway, each listed at Grade II.’ It also holds the largest single grave plot in the country, holding the bodies of 96 poor residents. 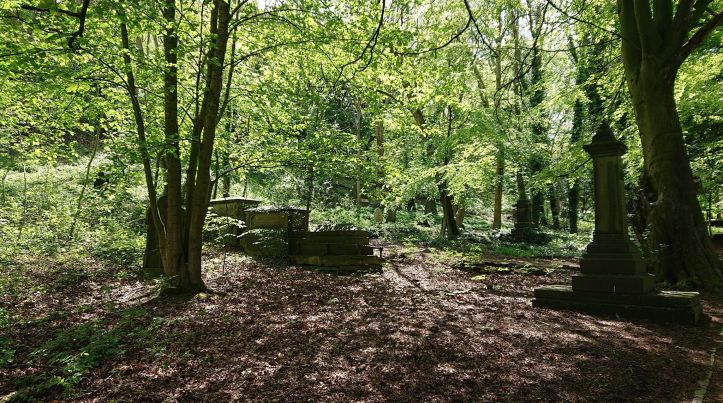 Ongoing conservational works have done wonders for the cemetery in recent years, resulting in the non-conformist chapel becoming a very popular music and arts venue. Built in the classical-revival style, it boasts Egyptian influences and a beautifully carved dove above the doorway. I was fortunate enough to see the chapel in its state of disrepair several years ago, and the transformation from desolation to functional beauty is phenomenal. 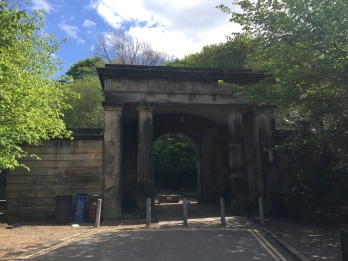 Hopefully, in time, the much-neglected Anglican chapel will follow suit, as so many of the monuments and burials within the cemetery are beautiful examples of early Victorian architecture. Much of the maintenance and conservation work has been undertaken by a team of dedicated volunteers, who are invaluable in preserving the future of historic cemeteries and heritage sites. They state on their website that, the cemetery was previously a ‘pretty grim place where none but the brave would enter.’ So thanks be to the volunteers, as my journey into Sheffield’s land of the dead was really rather pleasant! 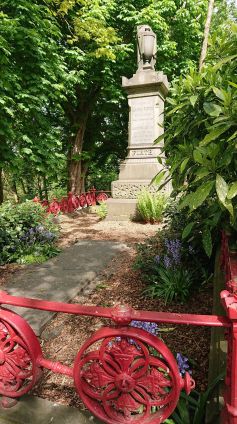 The first recorded burial is that of Mary Ann Fish, who died of tuberculosis. She now lies in good company, with a host of interesting lives nestled between the plots. 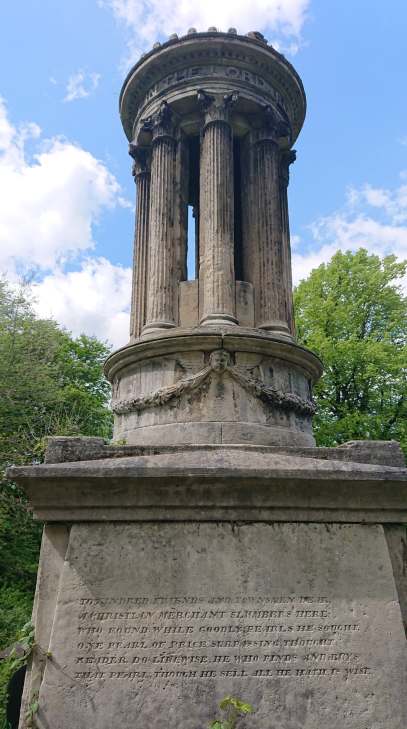 William Parker’s family memorial is one of the more prominent Grade II listed monuments, towering above its counterparts. Parker’s memorial is a large square tomb, topped with a circle of classical columns and god-fearing message. Parker himself was a cutlery merchant, and a popular one at that, with the great and good of Sheffield’s cutlery world taking part in his funeral procession. The website ‘flickeringlamps.com’ recounts the unfortunate tale of Parker’s wife, Katherine.

‘William Parker died intestate, meaning that he had no will…Although according to the laws of the time, Parker’s wife was not able to legally own property, it fell upon Katherine to manage her late husband’s affairs and oversee the winding up of his business.  As well as this, Katherine was left to bring up the couple’s five children alone.  Poor Katherine died by suicide in 1844, and the inquest into her death noted that she had had ‘immense anxieties and much to manage.’’ 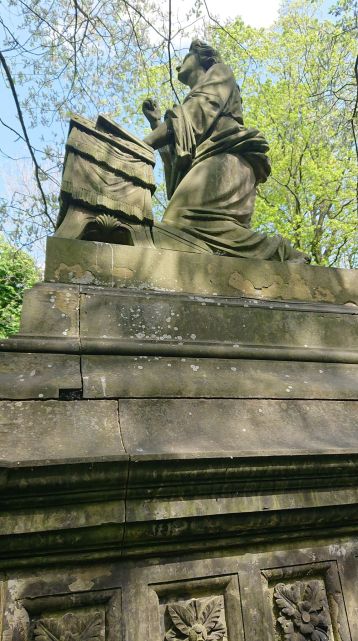 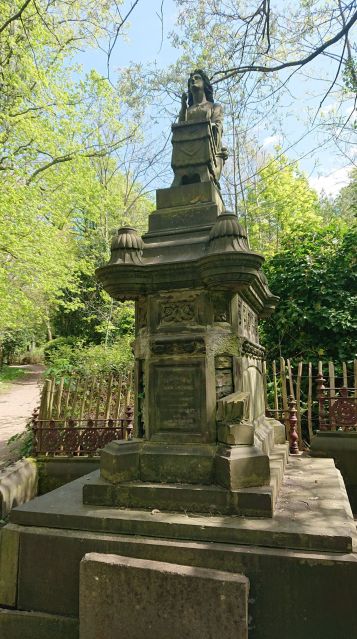 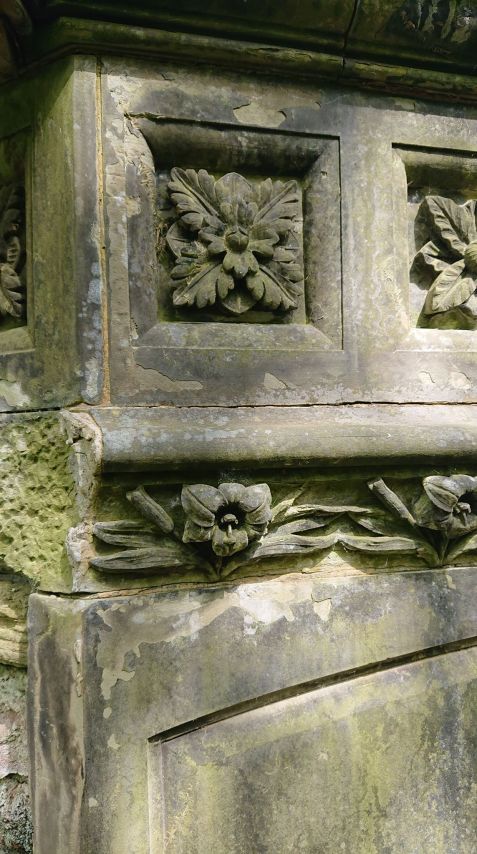 Another striking memorial is that of James Nicholson (industrialist), which features a large statue of a kneeling female figure and table. For a cemetery that sat in disrepair for so many years, many of the more unusual memorials such as these are remarkably intact.

The Anglican chapel is arguably the last, and largest conservation point within the cemetery. Built in 1850 in the neo-gothic style, it has beautiful ogival windows and an impressively large spire. Interestingly, the spire was purposefully made larger than necessary so that it could be seen from far away.

The gatehouse, built in a classical style with Egyptian features, has also been sympathetically conserved. It sits over the Porter Brook river giving the entrance of the cemetery a ‘crossing the river Styx’ feel…

While the mention of ‘catacombs’ may get many cemetery-lovers hot under the collar, those built into the hillside of the general cemetery were less than popular, with only ten burials recorded in the first ten years of its use.

Alongside merchants, industrialists and prominent names, there are the countless headstones of others; families and individuals whose histories are a mystery to us – yet, so many have beautiful, intricate symbolism carved into their stones, the likes of which are hard to find in most of the UK’s largest cemeteries. Alongside urns, hands and flowers, there are some beautiful examples of intricately carved weeping women, trees and angels. Considering many of these symbols were reserved for larger structures or for jewellery, they stand as proof that each burial ground holds untold secrets and hidden art. 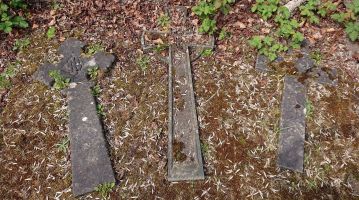 When the cemetery closed to new burials in 1979, the cemetery’s future was in danger. With several large plots sold off to developers, exhuming thousands of bodies was an off-putting task and much of the site fell into disrepair and disuse.

After several hundred headstones were removed to create a green space beside the more ‘landscaped’ part of the cemetery, many more were set into the cemetery’s terrace, fixed in place with a thick concrete. 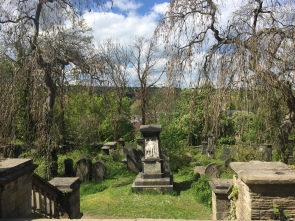 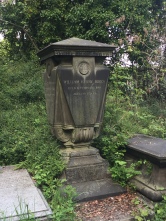 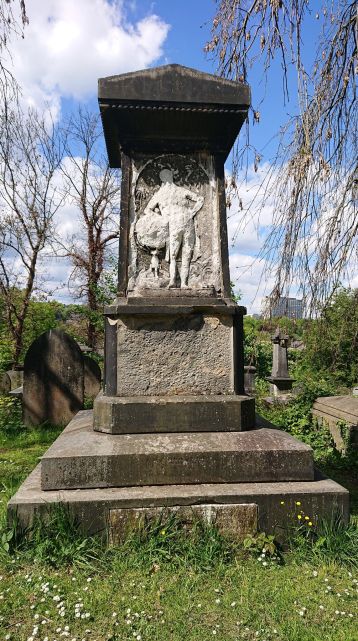 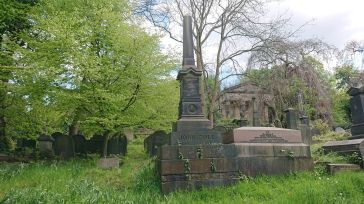 While this seems an unusual way to repurpose headstones, it offers Sheffield General an entrance way unlike any other I’ve visited. And while Sheffield General may not be cited as one of the greats, it is a wonderful example of a cemetery changing through the years, decaying, growing and rising back.