Following on from my exploration of Highgate’s West Cemetery, its time for a wander around Highgate East.

Unlike Highgate West, access to the East Cemetery is far more open, with no need for a guided tour and far fewer risks of plunging to one’s death down a damaged vault shaft.

Instead, there is a small fee (covered by your tour ticket for the West Cemetery, should you do both) and a complimentary, handy map of famous and popular interments to visit. 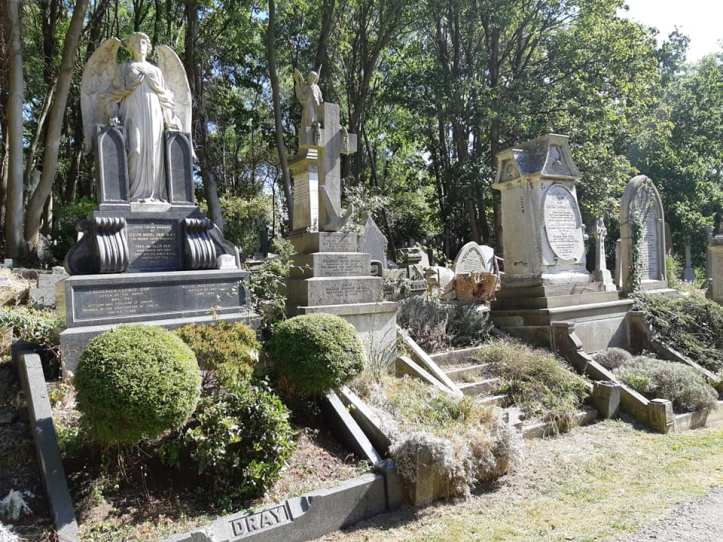 In 1854, the London Cemetery Company – who owned and operated the original Highgate cemetery – expanded their operations. Burying the dead in pleasant surroundings, rather than the overpopulated inner city burial grounds had become very lucrative. In the first twenty years of its existence, Highgate West already had around 10,500 burials.

In 1856, this new burial ground opened across Swains Lane as ‘Highgate East.’ The new cemetery was subsequently joined with the older, established ground, through a tunnel beneath the road, connecting the new cemetery to the Church of England chapel in the West side. The Highgate friends explain that –

‘With the aid of a hydraulic lift, coffins would descend into the tunnel and remain on cemetery ground for their passage to the other half of the cemetery.’

As with Highgate East, the West cemetery’s first burial was of a young woman. Mary-Anne Webster, a bakers daughter, was only 18 when she died and was buried in 1860. Sadly, I’m unaware of where her headstone is – if indeed, one still stands – so have no photograph to offer.

During the 1860, the East cemetery was at its peak of popularity. At one point, they were conducting around 30 funerals a day. The densely-packed headstones of much of the cemetery attest to this.

While one could spend days wandering between the headstones of Highgate, my latest visit lasted only a few hours. Nonetheless, the beauty of the environment and the variety (and sincerity) of epitaph and memorial – from Victorian to contemporary – was visually stunning.

Marx’s literal HEADstone marks the resting place of Marx, his wife and several other members of his family. Originally, Marx was buried elsewhere in the Eastern Cemetery, but, after Marx’s supporters raised funds, he was disinterred and reburied at the present location in 1954. The Communist Party of Great Britain funded the memorial, which has been regarded as one of the most famous and recognisable graves in the world. It is also Grade I listed and a frequent target for vandals, who, as recently as 2019, targeted the memorial twice in one month.

This famous and wonderfully simplistic headstone marks the resting place of the artist Patrick Caulfield. Caulfield was a Turner Prize nominated artist whose work is often regarded as being part of the Pop Art movement. He designed his own memorial, which sits close to the main path of the East Cemetery.

Jeremy Beadle shot to fame in the 1980s through the TV shows “Watch out Beadle’s about”, “You’ve been Framed”, and “Game for a Laugh”. Through the 80s and 90s, Jeremy Beadle became somewhat of a British national treasure. Beadle died in 2008 after contracting pneumonia and his family commissioned a simplistic and thoughtful memorial, commemorating his love of literature.

Malcolm McLaren was an infamous pop culture icon managing and masterminding the Sex Pistols and co-founding the SEX boutique with then-girlfriend Vivienne Westwood. McLaren was a controversial character throughout his life, making as many friends as enemies. Upon his death in 2010, McLaren was buried in a coffin sprayed with the phrase ‘Too Fast to Live, Too Young to Die.’ His headstone is fixed with a death mask of the deceased McLaren, made by artist Nick Reynolds.

Much like Marx, his grave has been subject to vandalism, being sprayed with the (admittedly, punk slogan) ‘No Future’ and daubed with green paint.

McLaren’s headstone was installed in 2013, after his wooden marker had been in place for 3 years… rather longer than the cemetery likes! (Punk until the end…?)

George Eliot is one of Highgate most famous and most visited graves. The female, Victorian novelist was known outside literary circles as Mary Ann Evans, she penned such literary classics as The Mill on the Floss, Daniel Deronda and Middlemarch. She had a tumultuous life, primarily due to her involvement with married men and the problems that ensued. Despite being an enormously successful novelist in her lifetime, she was not buried in Westminster Abbey, as was the convention for beloved writers of the time. Due to her adulterous affair with George Lewes, her final resting place was in Highgate, in the non-conformist section – buried beside the love of her life, Lewes himself.

As a tribute to Eliot and in adoration of her writing, many cemetery visitors often leave pens on her grave; a bright and fitting tribute to a literary force of the 19th century.

For a cemetery as enormous and sprawling as Highgate, there are stories and lives to be explored around every corner. There are the likes of William Shepherd Hoare’s family monument. Hoare was churchwarden to a Highgate Rise parish for 23 years. His family grave is particularly beautiful.

A little along the main path is the obelisk memorial to Ann Jewson Crisp who died aged 94. Her grave is as much about Crisp as it is her ‘faithful dog, Emperor’, whose likeness is carved into the memorial, front and centre.

Further into the cemetery, one may catch a glimpse of a small, marble piano (there are a handful of marble pianos from the 19th century in London cemeteries), commemorating the life of William Henry ‘Harry’ Thornton. Thornton was a classical pianist who entertained the troops in the WWI. He died during the influenza pandemic of 1918 and his family memorialised his life passion in death.

Between pianos, dogs, and enormous mausoleums, cemeteries such as Highgate hold thousands of stories and works of art around every corner.

All photographs are my own, unless otherwise stated.