Snarford St Lawrence is a tiny, unassuming church. It is set back from the road, surrounded by overgrown grass and shrubs and only opens its doors for one weekend a year.

But if you are fortunate enough to visit on that weekend, you will meet some of the most breath-taking memorials in the county, all packed tightly in one little building, in the middle of rural Lincolnshire.

The church itself is medieval, having additions throughout the 14thand 16thcenturies, with later renovations in the 19thcentury. The church is primarily of limestone construction and is modest in size, consisting of a nave, chancel, north chapel and west tower. The tower has lasted since the 12thcentury and nearby is a blocked 14thcentury doorway and 15thcentury two-light windows. The font is similarly 15thcentury and is as ornate as the memorials nearby; it has carved heads, shields and leaves, which are all in remarkable condition. 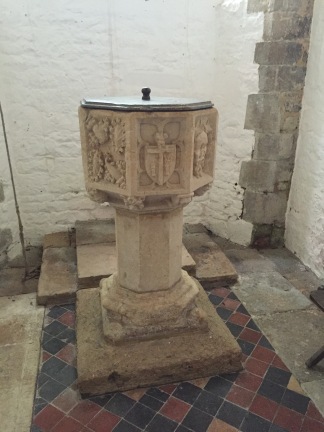 On the north wall of the chapel sits the first of the memorials; a painted alabaster likeness of Robert Rich, 1stEarl of Warwick and his wife. The Earl died in 1619 and doesn’t seem to have lived the most fascinating of lives. He married twice, divorcing his first wife Penelope Deveroux (who was lady in waiting to Queen Anne of Denmark) on the grounds of her infidelity. He was an incredibly wealthy landlord, owning over 75 manors and also spent a very short time in the commons (approximately 3 weeks) before succeeding to his father’s peerage. He died at the age of 59 and was succeeded by his eldest son, a prominent colonial administrator, puritan and admiral. Underneath the circular medallion and likeness of he and his wife sits a panel, engraved with a poem. On either side are rectangular columns and above sits the family’s coat of arms and various other heraldry markers, such as dragons and groups of three doves. 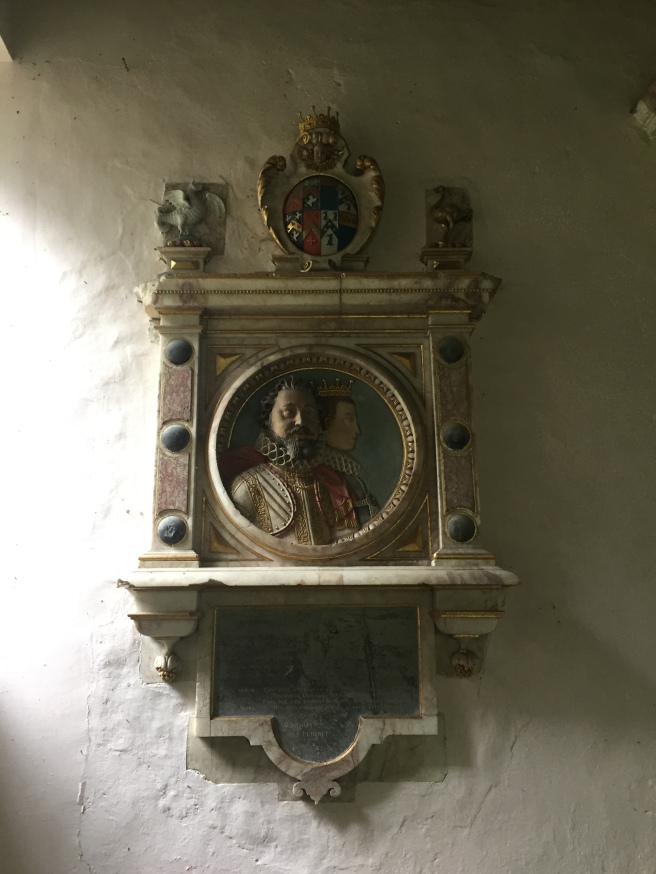 However, it is for the 16thand 17thcentury monuments that Snarford is most renowned. When visiting the church and circling these monuments, it seems a miracle there was ever any room for religious services.

Behind the alter are three monuments to the St Paul family (or ‘St. Pol’ as it is sometimes written), all of which are imposing in their sheer opulence. The St Paul family were a dynasty of ‘shrewd lawyers and politicians who grew rich at the time of the Reformation.’ They added to their already vast wealth by acquiring lands confiscated from Lincolnshire monasteries by Henry VIII. The family seat was at the now-destroyed Snarford Hall, which was a dominant feature in Lincolnshire when Snarford was a tiny medieval village.

Full-sized likenesses of Sir George St Paul (d. 1613) and his wife Lady Frances are fixed into a niche, reclining on one arm and looking outwards into the room.

Sir George was the most influential MP in the family’s history, being a leading magistrate and an MP in the year of the Armada. He also become a baronet under James I.

Beneath them, in a smaller niche, is a tiny likeness of their only child Mattathia. After twelve years of marriage, she was their only child and died before she reached the age of two. The child, however, is shown as a miniature woman, in full adult dress, rather than the small child of reality. Both women are in mourning dress and are wearing ruffs whereas Sir George is shown in full plate armour and is holding a sword. On the side of these memorials are ‘mourning putti’, meaning a small chubby baby (much like a cherub) shown grieving for the family. The putti on the St Paul tomb are particularly well preserved and striking in their own way. Around the cherubs and memorials are elaborate carvings of ropes, ribbons and memento mori, all beautifully rendered. 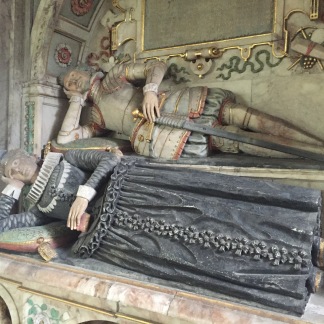 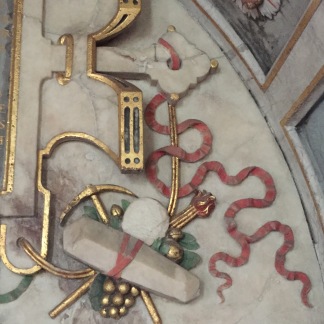 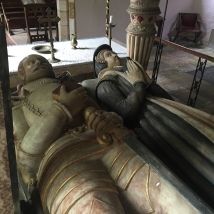 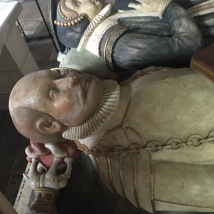 The enormous monument to Sir Thomas St Paul (d. 1588) is arguably the most impressive in Snarford. The tomb of Sir Thomas and his wife Faith Grantham, takes the form of a six-poster bed. On the bed itself lies Sir Thomas and his wife and beneath are likenesses of their children, all kneeling. Sir Thomas is depicted in full armour with a sword, wearing a gold chain with his feet on a cushion. His head rests atop the crest of his family; the ‘elephant and castle.’ Sir Thomas was also a ‘zealous protestant’, supporter of Elizabeth I’s  government, Sheriff of Lincolnshire and MP for Grimsby. Above them, atop each pillar, is the carving of a small weeping figure. In the centre of the canopy is a tiny altar, next to which an equally small man and woman are kneeling. The figure on top of the altar symbolises his heir, Sir George. The entire free-standing structure is painted and gilded and is as bright and impressive as it was in the 16thcentury. 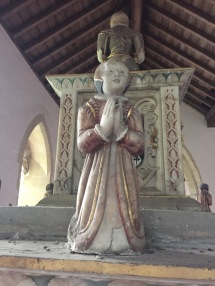 Somewhat overshadowed by the enormous tombs is the memorial scroll to the local men who lost their lives in WWI. Nonetheless, their importance and reverence is unquestioned by visitors to the church.

Outside, the overgrown churchyard provides a welcome sanctuary to wildlife and wildflowers that flourish beside obscured headstones. While the church at Snarford may spend most of its life under darkness and lock and key, should you be able during the churches festival, be sure to take a trip. Its treasures need to be seen to be believed.

All photographs my own.

For more images and other posts, please visit: https://www.facebook.com/burialsandbeyond/